THE BOUNDING BILLOW. PUBLISHED IN THE INTERESTS OF AMERICAN MEN-O'-WARSMEN. PUBLISHED AT INTERVALS ON U.S.F.S. OLYMPIA. MANILA, P.I., JUNE, 1898. Vol. I. No. 5...THE BATTLE OF MANILA BAY 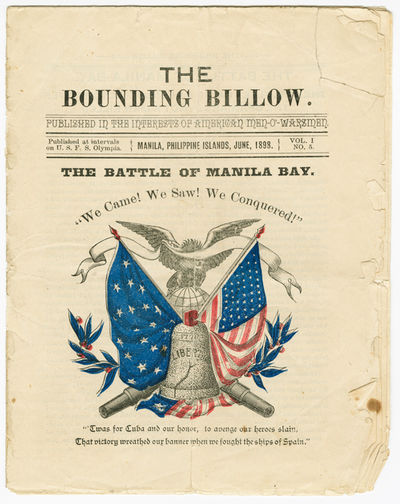 by [Spanish-American War]
Manila, Philippines, 1898. 16pp., printed in double columns. Color illustration on front wrapper, uncolored map on rear wrapper. Original pictorial self-wrappers. Rear wrapper detached (but present). Central vertical fold, wrappers with chips and tears in edges, upper outer corner of front wrapper repaired with tape on verso. Good. One of three issues of this scarce Spanish- American War periodical published on board Dewey's flagship, Olympia, in Manila Bay. There was a total of seven numbers of this naval periodical, the first two published in Nagasaki, the third in Yokahama, the fourth in Hong Kong, and numbers five to seven in Manila. The present issue, entirely devoted to the Battle of Manila Bay, is among the most desirable and contains American accounts and a translated Spanish account of the battle, several poems, and a map of the scene of action made by a sailor "with a couple of sail needles." The magazine was written and edited by Apprentice First Class Louis Stanley Young, and printed by Harry B. Glover on paper captured from the "Commandancia General del Arsenal de Cavite." Young, a former printer himself, improvised a print shop in a torpedo room on board the Olympia. An illustration of the Liberty Bell, two flags, an American eagle, etc. is printed on the front wrapper in black, red, and blue. "A historic piece, one of major proportions" - Moebs. MOEBS, AMERICA'S NAVAL HERITAGE 136. (Inventory #: WRCAM56306)
$750.00 add to cart or Buy Direct from
William Reese Co. - Americana
Share this item

MY TRIP TO CALIFORNIA IN '49 [wrapper title]

[Louisiana, Mo 1914
(click for more details about MY TRIP TO CALIFORNIA IN '49 [wrapper title])
View all from this seller>