JAMAICA. RETURN TO AN ADDRESS OF THE HONOURABLE THE HOUSE OF COMMONS, DATED 19 MARCH 1839; - FOR, COPIES OF ANY COMMUNICATIONS ADDRESSED TO THE SECRETARY OF STATE BY THE AGENT FOR THE ISLAND OF JAMAICA, RELATIVE TO THE CONDUCT OF THE NEGRO POPULATION IN THAT ISLAND [caption title] 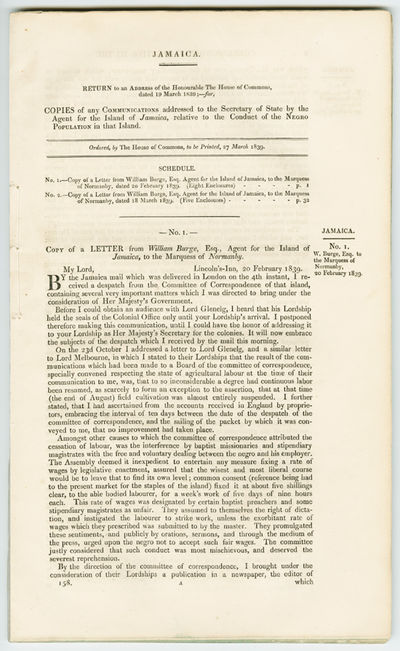 by [Jamaica]: [Slavery]
[London, 1839. 79,[1]pp. Folio. Gathered signatures, stitched. Small ink numerals added to recto page numbers. Near fine. A dense and detailed collection of correspondence and statistics related to the current state of labor among the "negro population" of Jamaica in 1839, with much information on the impact of labor strife upon the agricultural production of the colony. This interesting collection of British correspondence illustrates the tensions between plantation owners, government authorities, the former slave labor force, and religious missionaries in the West Indies. The first item is a lengthy report from William Burge, agent for the island of Jamaica, transmitting troubling news on the "state of agricultural labour" as "field cultivation" has been "almost entirely suspended." Burge diagnoses the cause of the troubles as "interference by baptist missionaries and stipendiary magistrates with the free and voluntary dealing between the negro and his employer." These "mischevious" reformers have deemed the wages offered to the black laborers as "unfair" and have "instigated the labourer to strike work, unless the exorbitant rate of wages which they prescribed as submitted to by the master. They promulgated these sentiments, and publicly by orations, sermons, and through the medium of the press, urged upon the negro not to accept such fair wages." Burge comments further on the "deplorable state of the cultivation of the colony" that has resulted from wage disputes among plantation owners and the black labor force. The letters and documents printed here also report in detail the effects of these developments on a variety of locations across the island, including statistical abstracts of wages and crop production (mainly sugar cane) for some of the estates. Not in Ragatz or the Library Company's Afro- Americana collection, nor in OCLC. (Inventory #: WRCAM56290)
$1,250.00 add to cart or Buy Direct from
William Reese Co. - Americana
Share this item

MY TRIP TO CALIFORNIA IN '49 [wrapper title]

[Louisiana, Mo 1914
(click for more details about MY TRIP TO CALIFORNIA IN '49 [wrapper title])
View all from this seller>