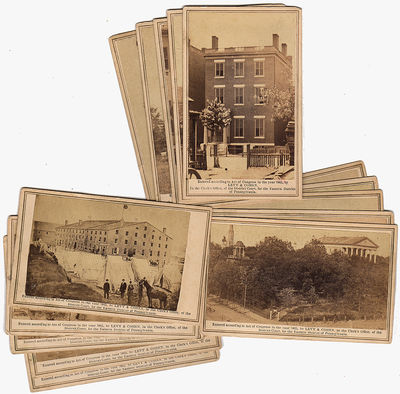 by Cornelius Levy and Leon Solis-Cohen
Group of 15 different carte-de-visite photographs of the Richmond area taken and sold by Levy & Cohen from their Civil War series, "Views of the Rebel Capital and its Environs." An unnumbered paper label affixed to the reverse of each card provides a title; six of the labels also contain short, printed descriptions of their scene. All are in nice shape with some light wear and soiling; one card is missing a corner tip that does not affect its image.

The cards in this grouping are:View of the Burnt District,

Residence of Gen. Lee,
View of Rockets,
Shipyard,
Capitol Building,
View of Capitol Square,
Penitentiary,
Richmond from Hollywood,
Ruins of Petersburg Bridge,
Tomb of James Monroe,
Portico of the Executive Mansion,
Drury's Bluff,
Chimborazo Hospital,
Treasury Building, and
Libby Prison.
Levy & Cohen was a partnership between two Jewish photographers whose office in Philadelphia was located at the corner of Ninth and Filbert Streets. Although the pair advertised themselves as landscape photographers and copyists, they toured Richmond in the summer of 1865 and recorded at least 33 different images. The September 1865 issue of the Philadelphia Photographer reported that

"Messrs. Levy & Cohen, two enterprising young men of our city, have returned with their Globe lens from a trip to the Rebel capital. They have brought with them a series of very fine negatives. . .. The are mostly excellent photographs and embrace all the points of historical interest in and about the city. . .. They have our earnest desires for their success."
The photograph of Libby Prison is especially interesting as its label notes that "Dick Turner stands in the foreground." Richard R. (Dick) Turner was the commissary of the Libby Prison and the cousin of its infamous commandant, Captain Thomas Turner. . Also, Levy & Cohen may have 'borrowed' this image as the Confederate Battle Flag is flying over the prison; that seems highly unlikely if the photograph was take five months after General Lee surrendered at Appomattox

Exceptionally scarce. All Levy & Cohen images from this series are rare, and only about 20 different views are known to have been sold in cdv format. The Library Company of Philadelphia holds the largest collection of these photographs with 40 cdvs and the 33 glass-plate negatives maintained in its Civil War Photography Collection. 17 different cartes-des-visite images from the series are held by the Library of Congress. OCLC identifies no other institutional holdings. The Rare Book Hub and Worthpoint show that the images rarely appear at auction. A presentation album with 16 albumen prints measuring approximately 5.5" x 7.5" realized $21,25 at Christie's auction on 6 October 2010. There are only 10 records of cdv images sold at auction (primarily at a venue Biblio won't allow me to name) since 2013 with individual prices averaging $610 each and ranging from $279 to over $1,000 depending upon their condition. (Inventory #: 009685)
$9,500.00 add to cart or Buy Direct from
Read'Em Again Books and Paper
Share this item

GENL GANALIS THE ROBBER AND ASSASSIN WAS DRIVEN, DAY AFTER DAY, FROM RANCHO TO RANCHO UNTIL HE COULD FIND NO REST IN HIS OWN NATIVE MOUNTAINS" - A small archive of letters sent to Colonel Edward G. W. Butler during his command of the 3rd U.S. Regiment of Dragoons during the Mexican-American War

Various locations 1848
(click for more details about GENL GANALIS THE ROBBER AND ASSASSIN WAS DRIVEN, DAY AFTER DAY, FROM RANCHO TO RANCHO UNTIL HE COULD FIND NO REST IN HIS OWN NATIVE MOUNTAINS" - A small archive of letters sent to Colonel Edward G. W. Butler during his command of the 3rd U.S. Regiment of Dragoons during the Mexican-American War)
View all from this seller>