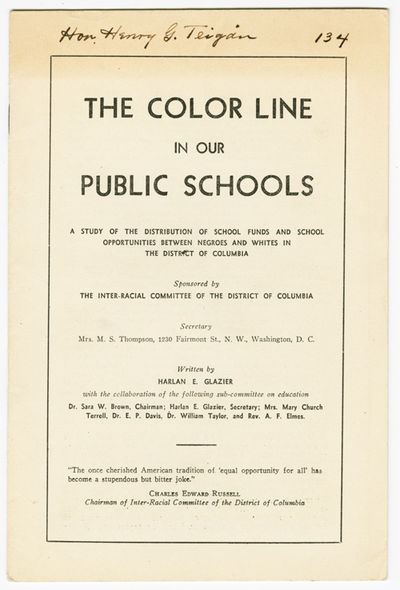 by Glazier, Harlan E.
[Washington, D.C., 1936. 16pp. Original printed self-wrappers. Contemporary ink ownership inscription of Henry G. Teigan on front wrapper. Mild even toning. Very good. A rare study of African-American education in the nation's capital, and a plea for the United States Congress to increase the segregated district's school budget. The text includes detailed reports directly comparing the "dual system" of African- American high schools, middle schools, and elementary schools to their whites-only counterparts. The resources of the two school systems were decidedly unequal, and the author of this report calls them "odious." The report was produced by the Inter-Racial Committee of the District of Columbia, which concludes that they "cannot refrain from uttering a protest against the nefarious segregation engendered by our dual system of education." This copy bears the ownership inscription of the Honorable Henry Teigan on the front wrapper. Teigan was a labor leader and one- term Congressman from Minnesota between 1937 and 1939, to whom this pamphlet was likely delivered while served on Capitol Hill. OCLC records just two copies, at the New York Public Library and Howard University. OCLC 42788150, 990755269. (Inventory #: WRCAM56305)
$600.00 add to cart or Buy Direct from
William Reese Co. - Americana
Share this item

OUR ROLL OF HONOR [manuscript title]

by [Woman's Board of Missions]

[N.p. 1903
(click for more details about OUR ROLL OF HONOR [manuscript title])

HOSPITAL LIFE IN THE ARMY OF THE POTOMAC

Boston : William V. Spencer , 1866
(click for more details about HOSPITAL LIFE IN THE ARMY OF THE POTOMAC)
View all from this seller>