A Late Letter from a Solicitous Mother to Her Only Son, both living in New-England. The Eleventh Edition. [Bound with:] A Letter from a Father to His Son, in Answer to Queries Respecting the Struggles of Sin in the Mind of a Believer; Whether he be in a State of Grace, While Under the Struggles and Combats of Sin. 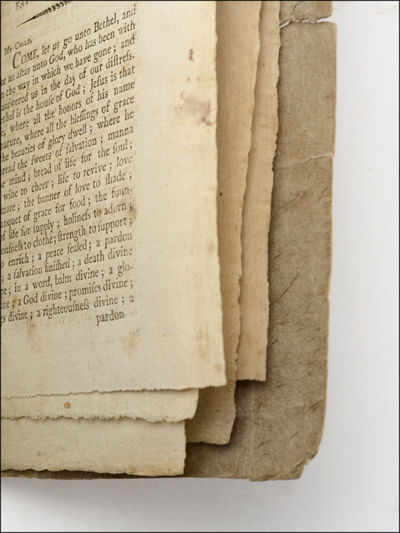 "Therefore, my child, as a good soldier of Jesus Christ, gird up the loins of your mind." The first title was originally published in Boston in 1746, and seems to have been something of an evergreen bit of piety; it was relatively soon after this that it was picked up as an American Tract Society title. This edition concludes with two poems, "The Advantages of Early Religion" and "Thoughts on God and Death."

The somewhat more uncommon second title seems only to have been published in this edition; the tentative publication date is assigned by Evans. This copy of the Letter from a Father is bound without the final three blank leaves. March was a fairly active printer, bookseller, newspaper publisher, and circulating library proprietor in Newburyport. American Imprints 2504 (Letter from a Solicitous Mother); Evans 33994 (Letter from a Father).

With the ink ownership inscription to the title page of the first title of Abigail Moulton, a name seemingly common enough in Newburyport of that period. Wrappers a bit stained and worn; cheap paper of the first title browned throughout; in very good condition. (Inventory #: 20048)
$225.00 add to cart or Buy Direct from
Garrett Scott, Bookseller
Share this item

The Western Guide Book, and Emigrant's Directory; Containing General Descriptions of Different Routes through the State of New-York, Ohio, Indiana, Illinois, and the Territory of Michigan, with short descriptions of the Climate, Soil, Productions, Prospects, &c.

Buffalo : Published by Oliver G. Steele; Charles Faxon, Printer , 1834
(click for more details about The Western Guide Book, and Emigrant's Directory; Containing General Descriptions of Different Routes through the State of New-York, Ohio, Indiana, Illinois, and the Territory of Michigan, with short descriptions of the Climate, Soil, Productions, Prospects, &c.)
View all from this seller>