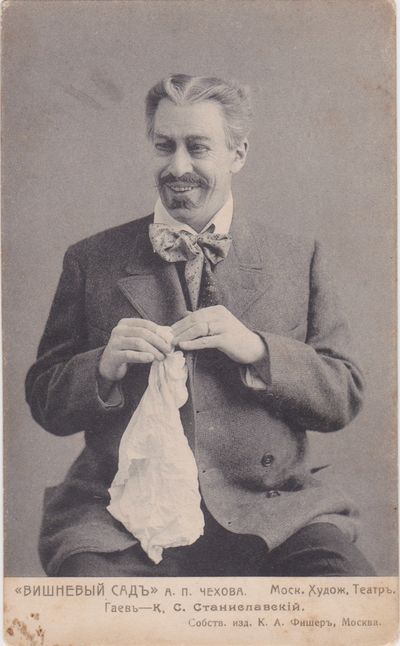 The Cherry Orchard opened at the Moscow Art Theatre on January 17, 1904, in a production directed by Konstantin Stanislavsky just six months before the death of Chekhov. In the play, a family is forced to sell their estate at auction to pay their debts. The buyer, Lopakhin, plans to cut down the family's beloved cherry orchard so he can build cottages on the estate.

Olga Knipper was the wife of Chekhov, Maria Lilina was the wife of Stanislavsky, and Ivan Moskvin became director of the Moscow Art Theatre in 1943. All three were among the 39 original members of the troupe when Stanislavsky founded it in 1898 with Vladimir Nemirovich-Danchenko.

Chekhov conceived The Cherry Orchard as a comedy but Stanislavsky turned it into a tragedy, angering Chekhov. "My play opened yesterday, so my mood is none too good," Chekhov wrote in a letter to author and dramatist Ivan Leontyev, known as Shcheglov (quoted in Laurence Senelick, Anton Chekhov's Selected Plays. New York: W.W. Norton, 2005, page 456). And in late March 1904, writing from Yalta, Chekhov declared in a letter to his wife Olga Knipper, the star of the play: "One thing I can say: Stanislavsky has butchered the play for me." (Senelick, page 457).

While Chekhov may not have liked the play, the public certainly did. Indeed, in a note on the verso of one card, an anonymous writer says (translating): "we have just got back from the Art Theatre, where we saw The Cherry Orchard. There are no words to tell how wonderful it was..." The note appears on a card showing Stanislavsky and his wife, Maria Lilina.

A.A. Gorozhankin published two of the cards in 1911. The famous Moscow photographer Karl Fisher issued all the others. Two of them, not identified as the Moscow Art Theatre production, are dated 1912.

A fascinating set of postcards depicting scenes from one of the theatre world's most acclaimed plays.

CONDITION: Inscription in ink to the verso of one card, stains or soiling to many cards, lower corner of one card (of Olga Knipper) damaged with slight loss of text; old bookseller's stamp to the verso of half a dozen cards; all a bit rubbed or edge-worn. About Good overall. (Inventory #: 2289)
$1,495.00 add to cart Available from Le Bookiniste
Share this item

[Anti-FDR] If You Do Not Want Senator Wagner's State Medicine Plan And If You Would Preserve Freedom for the Professions and All Enterprise Now Is the Time to Tell Your Representatives How You Wish Them to Speak for You in the Next Congress.

by Pettengill, Samuel B.

New York : National Committee to Uphold Constitutional Government , [ca. 1940]
(click for more details about [Anti-FDR] If You Do Not Want Senator Wagner's State Medicine Plan And If You Would Preserve Freedom for the Professions and All Enterprise Now Is the Time to Tell Your Representatives How You Wish Them to Speak for You in the Next Congress.)

[ANTIWAR] Calling for a Crusade

[Chicago] : Bulletin of the Atomic Scientists , [1947]
(click for more details about [ANTIWAR] Calling for a Crusade)
View all from this seller>