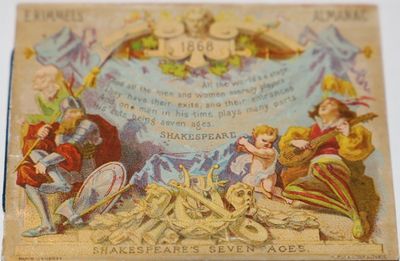 Philadelphia: John Wyeth & Brother, 1867. First edition. Wraps. Sting through stab holes. . Near Fine. Oblong, 65 by 87 mm. 8 pages, including wrap covers. Chromolithographic illustration on each page, after the title page, each depicting one of the seven ages. Two months covered each page, the months being shown as a column flanking the illustration. Scarce, with only two copies recorded on OCLC First Search -- Rochester Museum and Philadelphia Athenaeum. Not in Folger catalogue. (Inventory #: 006819)
$250.00 add to cart Available from
White Fox Rare Books & Antiques
Share this item
White Fox Rare Books and Antiques
Offered by