Report of the Committee of Claims, on the Petition of Elizabeth Hamilton 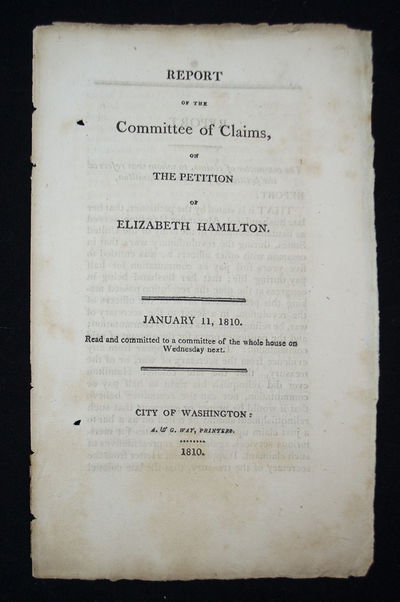 by HAMILTON, Alexander
Alexander Hamilton's Widow's Petition for His Pension [HAMILTON, Alexander, subject], [HAMILTON, Elizabeth, subject]. Report of the Committee of Claims, on the Petition of Elizabeth Hamilton. January 11, 1810. Read and Committed to a Committee of the Whole House on next. City of Washington, A. & G. Way, Printers: 1810. First edition. Unbound pamphlet. Octavo (9 x 5 3/8 inches; 230 x 138 mm). [3], [1, blank] pp. With two stab marks. Uncut. Very good. We could only find one other copy at a library and no copies at auction. ìOn July 11, 1804, Alexander Hamilton was mortally wounded during a duel with Aaron Burr and died the following day. Five years after Hamilton's untimely death, his widow, Elizabeth Hamilton, submitted a petition to Congress asking for a pension based on her husband's military service as Lieutenant Colonel in the Revolutionary war. In 1782, Hamilton had been a member of the Continental Congress that passed legislation establishing army pensions. For ethical reasons, he had relinquished his claim to compensation. In her petition, presented to the House of Representatives on May 30, 1809, Elizabeth Hamilton asked Congress to restore her husband's right to a pension. Along with her petition, she submitted Hamilton's October 28, 1783 Commission as Lieutenant Colonel for the Revolutionary Army and a personal statement of his property and debts. Believed to be written on July 1, 1804, just days before he died, Hamilton's statement is an explanation of his financial circumstances "if an accident should happen to me." In it, he ties his public service to the present state of his finances, which included debts that would prove a burden to his family. Mrs. Hamilton's initial attempt to secure a pension failed, but in 1816, Congress passed a bill granting five years pay, which was a full pension, to Mrs. Hamilton.î (The National Archives). HBS 68423. $1,250 (Inventory #: 68423)
$1,250.00 add to cart Available from
Heritage Book Shop
Share this item