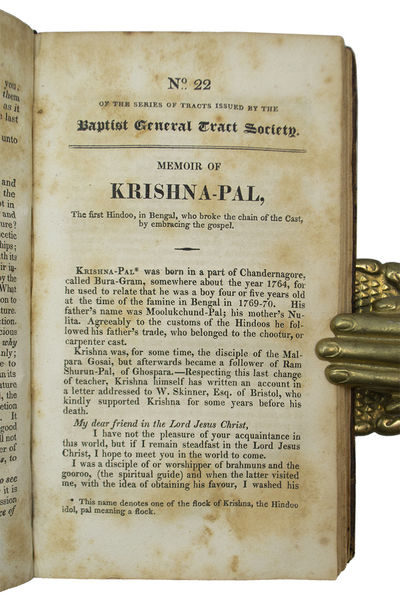 by HINDU
The First Appearance of The Memoir of Krishna-Pal [Hindu][American Tracts]. Memoir of Krishna-Pal, [as found in] The Tracts of the Baptist General Tract Society, Volume I. Philadelphia: Published by the Baptist General Tract Society, and Sold at their Depository, 1828. First edition. One octavo volume contains 41 numbered tracts. Each tract is individually paginated and contains the header ì No. [22] of the series of tracts issued by the Baptist General Tract Society.î Tract number 22 is the Memoir of Krishna-Pal, [16] pp, who is described as ìThe first Hindoo, in Bengal, who broke the chain of the cast, by embracing the gospel.î Other works include tract number 41, Divine Songs for Children, By Isaac Watts, D.D. [24]pp. ìDivine Songs was one of the standard texts of English childhood for almost two centuries after its first publication in 1715.î (The Hockliffe Project). Bound in contemporary full marbled sheep. Spine ruled in gilt. With red Morocco spine label, lettered in gilt. Hinges at top of spine with some cracking. Some chipping to tail of spine and board edges. Some light repair to head of spine. Some minor surface cracking to spine. Foxed and toned throughout, as usual for American paper. Overall a very good copy. A more expanded version of the Memoir was later published separately as The First Hindoo Convert: A Memoir of Krishna Pal, a Preacher of the Gospel to His Countrymen, More than Twenty Years. Philadelphia: American Baptist Publication Society, 1852. We could find no copies of this issue (besides the present copy) or the 1852 edition at auction. ìKrishna Pal was born in Birra Gram in Bengal, and was raised as a Hindu. He eventually became a guru (teacher) and had taught for some 16 years before meeting Dr. John Thomas of the Serampore mission established by William CAREY. Pal had broken his arm, and Thomas set it for him. Converted to Christianity, he was baptized by Carey on December 28, 1800. Shortly after his baptism, Pal erected a chapel and continued to work directly with the missionaries for the next few years. In 1804, they sent him to Calcutta (where they themselves were not allowed access) as a missionary. He worked there for five years and then traveled around the region, settling in English Bazaar for six years and then returning to Calcutta, where he died on August 22, 1822.î (Encyclopedia of Protestantism, By J. Gordon Melton) HBS 68427. $1,000 (Inventory #: 68427)
$1,000.00 add to cart Available from
Heritage Book Shop
Share this item