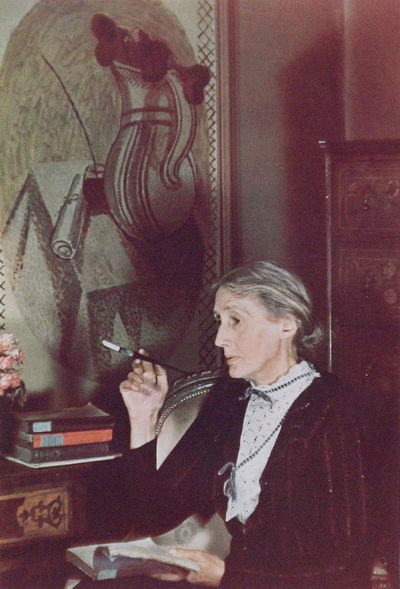 by WOOLF, VIRGINIA; FREUND, GISÈLE
London: np, 1939. First edition. Framed. Fine. THE MOST CELEBRATED PHOTOGRAPH FROM VIRGINIA WOOLF'S LAST SITTING WITH A PROFESSIONAL PHOTOGRAPHER; GISÈLE FREUND'S PHOTOGRAPHS FROM THIS SITTING ARE THE ONLY COLOR PHOTOGRAPHS EVER TAKEN OF WOOLF. "Woolf was acutely self-conscious and disliked sitting for pictures, never mind 'seeing herself'. But a few rare portraits, often by her family or friends, capture her inner spirit... Freund's images, taken just before the outbreak of war in 1939, are extremely valuable, for not only are they unique in showing Woolf in her London home, but they are in colour. Freund pioneered colour photography and made portraits of James Joyce, Samuel Beckett, Aldous Huxley, and many other writers.

"Freund was twice refused admission to Tavistock Square but eventually Woolf succumbed. She agreed to change her clothes to see which best suited the colour harmony... In some of the prints, Woolf is pale and lined, in others smiling a little and more youthful. The background of fabrics and mural panels by Bell and Grant adds to the value of the images; this was the inner sanctum of the queen of Bloomsbury where parties were given and friends came to tea. Just over a year later the house was destroyed in the blitz but, for some time, mural panels were left hanging on the wall, open to the weather, as recorded later by the Woolfs' friends Stephen Spender and William Plomer, as the last vestiges of a disappearing world." (Richard Shone, "Portraits of Virginia Woolf: here, the true face of the modern writer", The Guardian, 20 June 2014).

"Freund, who was closely associated in Paris with Sylvia Beach, her bookshop Shakespeare & Company, and its visiting authors, including James Joyce, specialised in photographs of writers. Indeed, it was Joyce who suggested that she should add to her collection by going to London. He assured her that if English writers knew she had photographed him and that he was pleased with the results, they would readily agree to sit for her. This proved correct, and she successfully photographed T.S. Eliot, Elizabeth Bowen, George Bernard Shaw, Vita Sackville-West, who also provided her with a letter of introduction, Herbert Read and Peggy Guggenheim, Victoria Ocampo and Hugh Walpole.

"Virginia Woolf, however, initially turned her down. That is, until Victoria Ocampo, the wealthy Argentinian founder and publisher of the literary review Sur, whom Woolf admired, turned up at Tavistock Square with Freund in tow in order to show Woolf contact sheets of the literary men and women Freund had photographed.

"Under pressure, Woolf gave in, and a sitting was arranged for later that same day. Woolf 's diary, written before the afternoon session commenced, reveals much irritation: 'No getting out of it, with Okampo [sic] on the sofa, & Freund there in the flesh. So my afternoon is gone in the way to me most detestable and upsetting of all.' Freund had recently begun working with colour film, which had just come on to the market, and Woolf dreaded becoming a 'life-sized life coloured animated photograph', yet it pleased her that, at her request, Leonard would also be photographed.

"She left no account of this sitting, but we can deduce, from details supplied by Freund and from other clues, that it was an unexpected success. Perhaps Woolf 's dread was removed by Joyce's message, or Vita Sackville-West's introductory letter, for the photographs show that she willingly collaborated: in fact, she offered to show Freund her wardrobe so that she could help choose the most suitable clothes, and three times changed her blouse and once the jacket she was wearing.

"At one point she proudly informed Freund that there had been a celebrated photographer in her own family, and she brought out a copy of the book that the Hogarth Press had published of Julia Margaret Cameron's photographs, with essays by herself and Roger Fry, and this she inscribed to Freund.

"Out of this session came some of the most eloquent photo-portraits of Woolf ever produced. They vary in mood, as outward composure gives way to melancholy introspection. They are also the only colour photographs of Woolf ever taken. For technical reasons, it was not possible to publish them in colour at the time, and for many years they were known only in black-and-white format.

"After a bomb had sliced open the house in October 1940, and destroyed the better part of this room, the decorations on the fireplace wall could be seen from the street below, a fragile reminder of a different age, a different way of life." (Frances Spalding, "The last photograph of Virginia Woolf", The Telegraph, July 9, 2014).