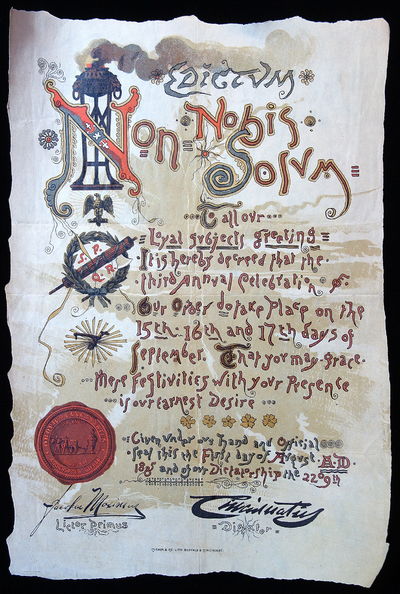 Buffalo & Cincinnati: Cosack & Co., 1885. Titled "Edictum Non-Nobis Solum" - Order of Cincinnatus militia invitation for September 15-17, 1885; the third annual celebration of "our order". annual - seal is marked 1882. Litho with fraternal imagery and decorative elements. Deckled edges. Measures 14 1/2" x 10". Reverse is blank. The Society of the Cincinnati was a fraternal and charitable association of Continental Army officers that sparked widespread conspiracy theories and tested Washington's efforts to carefully manage his legacy. Largely the brainchild of General Henry Knox, the Society was founded in May 1783, in response to Congress's dissolution of the Continental Army.

The Society took its name from the ancient Lucius Quintus Cincinnatus, who was appointed dictator in time of crisis and returned to his farm, giving up all political and military power, after defeating the enemies of the Roman Republic.
Letter folds. (Inventory #: 27003697)
$125.00 add to cart or Buy Direct from Eclectibles
Share this item