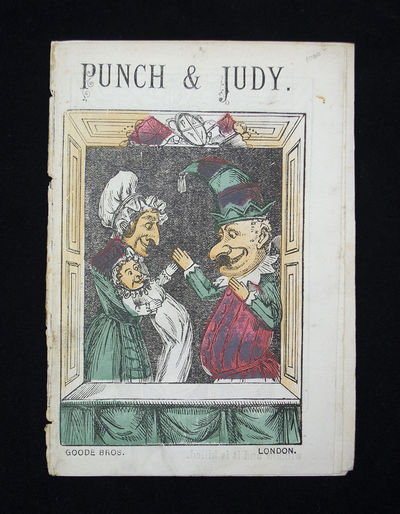 by PUNCH AND JUDY
Rare Illustrated Punch and Judy Pamphlet [PUNCH AND JUDY]. Punch & Judy. London: Goode Bros. [N.d.c.a. 1855-1860] Unbound pamphlet, issued as a single sheet. Small octavo (5 7/8 x 4 3/8 inches; 149 x 113 mm). With 8 unnumbered pages [5], [2, advertisements], [1] pp. Six pages with illustrations, four of which are colored by hand. And with a two-page advertisement for Mrs. Winslow's soothing syrup. Dated from period of activity of publisher according the the National Library of Scotland. We could find no copies at auction and only three copies of this on OCLC at the National Library of Scotland, The Victoria and Albert, and the University of New Mexico. Unbound pamphlet, some very light wear and soiling, otherwise a very good copy of this rare item. ìPunch and Judy is the traditional puppet show featuring Mr. Punch and his wife Judy. An archetypical and controversial British figure with his origins in the charismatic 16th century Italian puppet Pulcinella, Mr Punch has been performing in the UK for over 350 years. A puppet play that would have featured a version of Punch was first recorded in England in May 1662 by the diarist Samuel Pepys. He noted seeing it in Covent Garden, London... By the middle of the 18th century Punch in England had discarded his plain white Italian costume and had started to wear the red and yellow outfit of the English jester or fool. With Punch's move from marionette stage to portable booth came new clothes and new companions. By 1825 Punch's wife was being called Judy instead of Joan and he had a dog called Toby, usually played by a real dog... The earliest script of a Punch and Judy show dates from 1827 when the journalist John Payne Collier recorded the script of a performance by Piccini, the 82-year old Italian Punchman who had worked in London since he arrived in 1779. At the same time, the British caricaturist George Cruikshank produced sketches of the various scenes, noting that the script was: ëa faithful copy and description of the various scenes represented by this Italian, whose performance of Punch was far superior in every respect to anything of the sort to be seen in the present dayí. Punch historians have doubted the accuracy of the script, but the illustrations vividly recreate the action and characters, many of which we know today.î (Victoria and Albert Museum) HBS 68437. $1,000 (Inventory #: 68437)
$1,000.00 add to cart Available from
Heritage Book Shop
Share this item