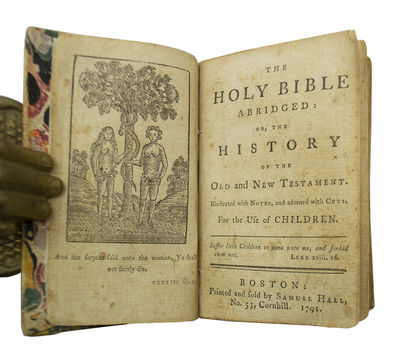 by BIBLE IN ENGLISH
Very Rare Early American Edition of a Childrenís Pocket Bible [BIBLE IN ENGLISH]. The Holy Bible Abridged: Or, the History of the Old and New Testament. Illustrated with Notes, and Adorned with Cuts. For the Use of Children. [Two lines from Luke]. Boston: Samuel Hall, 1791. Early American edition and first Samuel Hall edition, second Boston edition. There were only a total of five Children's bibles published in America before 1791. The First American edition was printed in Boston in 1782 by Robert Hodge for N. Coverly, followed by a Worcester, (Massachusetts) 1786 edition by Isaiah Thomas, 1786 and 1788 Philadelphia editions and a 1790 New York edition. Our present copy was published the year after the New York edition. Thirtytwomo (4 1/8 x 2 3/4 inches; 104 x 67 mm). [4], vii-ix, [8], 18-173, [1] pp. With frontispiece of Adam and Eve and fifty-nine crude but charming woodcuts illustrations depicting stories from the text meant to appeal to young children. The stories that have been abridged for use in this Bible generally consist of the more well- known stories which would be of interest to children such as Creation, Adam & Eve and Jonah and the Whale from the Old Testament as well as the birth, baptism and crucifixion of Jesus from the New Testament. Listed in Evans but not in Sabin. We could find no copies of this edition at auction and only one copy found at the Massachusetts Historical Society. All early American editions are rare and only two complete copies of the New York 1790 edition since 1976. There was the 1786 Worcester edition at auction in 2008 but it was incomplete. Contemporary marbled paper over boards, repacked with matching paper. Inner hinges strengthened. Bound without endpapers. Some soiling and toning throughout. One leaf (page 145) with some fraying to the edges, not affecting text. Overall very good, particularly for a childrenís book. The rarity of this book can somewhat be contributed to its very small size and that it was intended for the use of children. Something as delicate and tiny as this Bible in the hands of a child had little hope for a bright future. ìBy 1789 Bible story collections specifically for children had existed in the mother country for nearly a century, an active market in the American colonies had not opened up. Neither American Protestants nor American Catholics (of whom were growing in numbers) seemed ready to give Bible stories to their children. In the 1780ís the American situation changed radically. Boston printers pirated Newberyís Holy Bible Abridged; in 1786 the astute Worcester printer, Isaiah Thomas, followed suit; and by 1815 The Holy Bible Abridged had been printed in urban and provincial print centers all over the America northeast.î (The Bible for Children: From the Age of Gutenberg to the Present. By Ruth B. Bottigheimer) Shipton & Mooney, 46126, Bristol, B7648, Welch, D.A. Amer. childrenís books, 6127, ESTC W1077, Brinley 5815. HBS 68436. $6,500 (Inventory #: 68436)
$6,500.00 add to cart Available from
Heritage Book Shop
Share this item