[TEXANA]. Exploration of the Red River of Louisiana, in the Year 1852 [33rd Congress, 1st Session, House of Representatives. Executive Doc.] 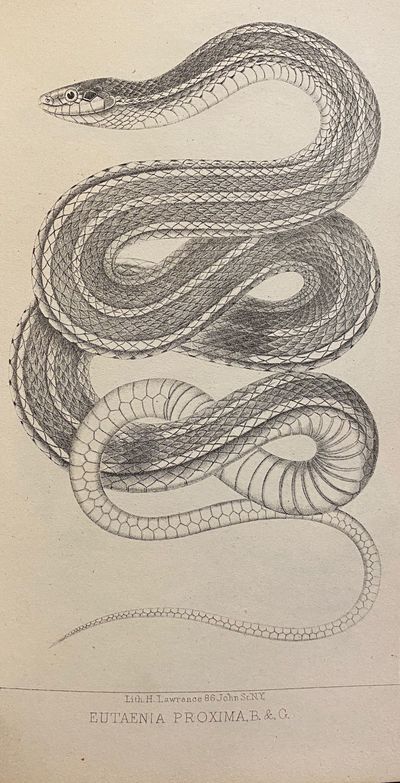 by Marcy, Randolph B. and George B. McClellan
Third edition. Very good. COMPLETE SET of 2 vols. (text + Atlas). xv, [1], 286 pp. COMPLETE with 65 maps (plus one duplicate); Landscapes: I-XII; Geological Sections: 1, 3-11 (#2 not issued); Paleontology: 1-6; Zoology: 1-18 (plus duplicate of #5); Botanical: 1-17, 19-20 (#18 not issued). Original blind-stamped cloth, edges worn, outer joints sympathetically repaired with Japanese tissue, original cloth spine laid down, hinges perfectly intact. ATLAS volume: COMPLETE with both maps: "Map of the Country between the Frontiers of Arkansas and New Mexico" (sic) measures 156 x 73 cm; staining where reattached to cloth chemise (SEE IMAGES) several short tears at the fold intersections (folding inconsistent over the years), some edge wear; "Map of the Country upon Upper Red River" measures 90 x 43.5 cm, staining where attached to cloth chemise. Cloth worn along board edges, spine chipped and partially defective but perfectly sound. With some faults as described and illustrated, and priced accordingly. NOT ex-library! An important work detailing the exploration of northern Texas and part of present-day Oklahoma, with much information on the Indians of the region.

"Written by one of the greatest nineteenth-century American explorers, this is one of the most interesting accounts of an original exploration of unknown parts of Texas. [...] Marcy described in detail the little-known Wichita tribe and compiled the first Wichita dictionary." (Jenkins, Basic Texas Books 135B).

While Marcy was ultimately unsuccessful in finding the true headwaters of the Red River, he did accomplish some of his other goals and, in the process, provided the first lithographic documentation of the unexplored and dramatic Palo Duro Canyon, in fact the first of the great southwestern canyons to be documented and published for a popular audience. Another reason for the popularity of the present work was the intense interest generated in the expedition due to the erroneous news that Marcy and his party had been massacred by Comanche.

Nonetheless, it contains a "Detailed and articulate account of western Oklahoma and the Texas Panhandle during 1852. Marcy's descriptions of the Comanches and Wichitas are among the most frequently quoted of the mid-nineteenth century." (Tate, The Indians of Texas: An Annotated Research Bibliography 2463).