No Cross, No Crown 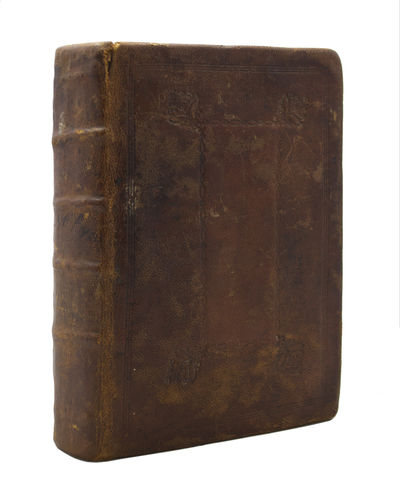 by PENN, William
The First American Edition, In a Contemporary Binding PENN, William. No cross, no crown. A discourse shewing the nature and discipline of the holy cross of Christ. And that the denial of self, and daily bearing of Christís cross, is the alone way to the rest and kingdom of God. To which are added the living and dying testimonies of divers persons of fame and learning in favour of this treatise. By William Penn. [Six lines of Scripture texts]. The Seventh Edition. Boston: Printed and sold by Rogers and Fowle, 1747. First American Edition (states seventh over all edition). Two sixteen volumes in one (5 7/8 x 4 inches; 148 x 100 mm). [24], 287, [1, blank]; [4], 184, [4] pp. With a separate title-page and pagination for volume II as issued. We could find only one complete copy at auction in the past 40 years. Full contemporary American sheep. Boards ruled and stamped in blind. Some minor rubbing to boards. Without free endpapers. Early ink notes on endpapers. Some light soiling and toning to pages, but generally a very crisp copy. Overall very good. William Penn was a Quaker leader and founder of Pennsylvania ìHe was imprisoned in the Tower of London, where he wrote his most famous book, No Cross, No Crown (1669). In this work he expounded the Quaker-Puritan morality with eloquence, learning, and flashes of humour, condemning the worldliness and luxury of Restoration England and extolling both Puritan conceptions of ascetic self-denial and Quaker ideals of social reform. No Cross, No Crown stands alongside the letters of St. Paul, Boethiusís Consolation of Philosophy, and John Bunyanís Pilgrimís Progress as one of the worldís finest examples of prison literature. Penn was released from the Tower in 1669.î (Britannica). "In 1668 William Penn, later to found the province of Pennsylvania, was imprisoned in the Tower of London for publishing his unorthodox view of the Trinity in a once notorious but now forgotten tract, The Sandy Foundations Shaken... [While imprisoned] Penn used his time in writing and as a result there was published in the year of his release (1669) his most ambitions and most learned work, No Cross No Crown... This was not a theological treatise in the ordinary sense but rather what might be called a guide to practical Christianity and a commentary on daily Christian living... The original version of 1669 has never been reprinted. Many of the erudite references which still cause commentators to remark on the astonishing maturity of Penn in his twenties were in fact added to the second edition... For two centuries it remained the basic guide for Quaker living... Since that time is has been only rarely reprinted and yet remains generally accepted as the clearest exposition of the beliefs of members of the Society of Friends, which has always been strongly represented in the State which bears his name. (PMM, 150). Evans, 6041, ESTC W28689. PMM 150 (First Edition 1669). HBS 68441. $2,000 (Inventory #: 68441)
$2,000.00 add to cart Available from
Heritage Book Shop
Share this item