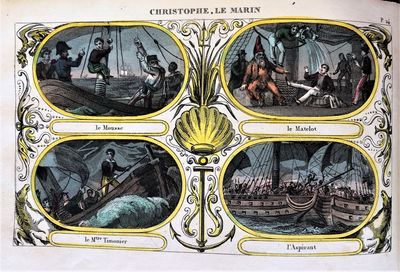 by SAVIGNAC, Alida de (1790-1847)
Paris: (Imprimerie A. Pinard for) Désirée Eymery, 1836. 8vo (128 x 207 mm). 71 pages, engraved frontispiece, engraved title with vignette and 8 engraved plates, each with four scenes, all engravings hand-colored under the publisher's direction. Fifth and sixth plates in wrong order; some light foxing to text, front free endpaper creased. Original illustrated publisher's buff boards, the etched illustrations showing at center of front cover a proscenium on a pedestal bearing the title, the closed curtain painted with a female figure and flanked by female statues, surrounded by a neo-Renaissance border of swirling tendrils, floral swags, chinoiserie grotesques, and two pairs of nymphs; at center of back cover a ship within a cartouche edged with wheat sheaves and arrows, other vignettes on smooth spine (covers bowed and somewhat soiled, front hinge weak, front free endpaper creased).***

Only Edition of an entertaining and instructive tale within a tale, for older children (boys). Four cousins gather during their winter holiday, and at the end of a long day of play talk turns to their futures. All four harbor outsized ambitions, in four different areas - art, the marine, commerce, and the law, vying for who will be the most powerful minister of state. Having overheard their chatter, their hostess, the mother of two of the boys, plans a show for Carnival that will relieve them of their naiveté without, she hopes, dampening their enthusiasm.

Enter the Biorama, a large box with moving figures (a pun on the "diorama," invented by Daguerre and Charles Marie Bouton in 1822), operated by an assistant while an older cousin, disguised as an elderly Italian, narrates the moral tale "Les Petits Ambitieux." Four magic talismans are given by a Venetian sorcerer to a quartet of youngsters with analogous interests to our boys. One embarks upon the hardscrabble life of an artist, another becomes a sailor (flouting his father's wish that he attend the naval academy), the third enrolls as a law student, and the fourth enters the world of business at the lowest rung, as a grocery assistant. All undergo hardships, temptations, and trials, from poverty to the jealousy of their peers, through which they are guided by their magic talismans, which invariably counsel patience, charity and kindness to one's fellows, assiduous study, and respect of one's superiors. Their life stories contain lessons in history, art, geography, commerce, and even chemistry (the businessman owns a sugar refinery), as well as glimpses of social corruption worthy of Balzac. The crucial episodes in each character's career are illustrated in 32 engraved scenes,eight per character, set four apiece within ornamental borders on the hand-colored plates, representing the scenes of the Biorama.

With guidance from their talismans, the young men eventually attain the summits of their chosen professions, but only after many years of struggle. At the end the magic ingredients of the talismans are revealed to be nothing more than "good sense," and the source of their wisdom is found ... in the "Bibliothèque d'Education," Quai Voltaire, founded by the publisher, Désirée Eymery (daughter of Alexis).

Adélaïde Esther Charles d'Abillon de Savignac, daughter of aristocrats who lost their fortune in the Revolution, was a rebel against the social norms of her class, refusing to marry, and supporting herself as a teacher. She elaborated her own child-centered pedagogy and became a prolific author of children's books that combined, like this one, instruction and fun. A proponent of women's education, she was a contributing journalist to a number of periodicals for girls and women.

The Draughts of the Most Remarkable Fortified Towns of Europe, with a geographical description of the said places ... to which is prefix'd an introduction to military architecture, or fortification..

London : printed for Isaac Cleave and John Hartley , 1701
(click for more details about The Draughts of the Most Remarkable Fortified Towns of Europe, with a geographical description of the said places ... to which is prefix'd an introduction to military architecture, or fortification..)
View all from this seller>