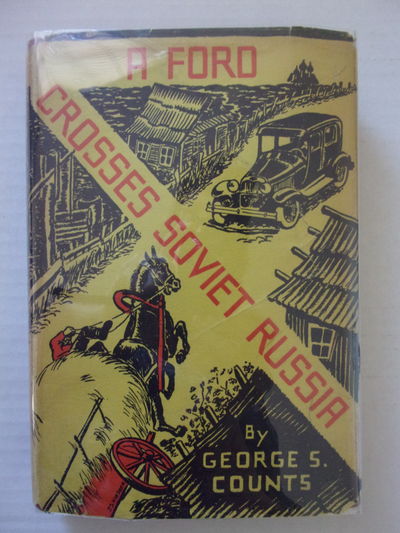 by COUNTS, George S.
(AUTOMOBILE TRAVEL - RUSSIA) COUNTS, George S. A FORD CROSSES SOVIET RUSSIA. Boston: Stratford Company, (1930). 8vo. Cloth, decorated dust jacket. Frontispiece map, (ii), xii, 223 pages. First edition. "The observations, experiences and impressions of the first American to motor across Soviet Russia." The author, a professor of education at Columbia University, drove 6,000 mile during the summer and autumn of 1929 in order to compile his "intimate close-up of the soul of Soviet Russia." He got a lot of mileage out of his book in other ways, too: following its publication he was frequently quoted in the press as an expert on the USSR, and after World War II became a harsh critic of its educational system. He was later a founder and chairman of the New York Senate Liberal Party, and even ran for the U.S. Senate on its ticket in 1952. (He lost.) Very scarce in the dust jacket, designed by J.S. Kirshen. (Inventory #: 39972)
$325.00 add to cart Available from Bookpress
Share this item