A Collection of more than 100 Language of Flowers titles published between 1655 and 1897, with one manuscript and one ephemeral item 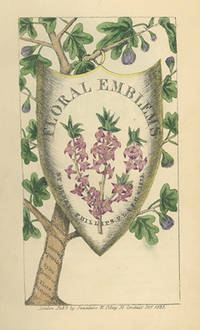 See Beverly Seaton, The Language of Flowers, A History. University Press of Virginia, 1995

by LANGUAGE OF FLOWERS
First or early editions. Various places and publishers, 1655-1897, 1655. See Beverly Seaton, The Language of Flowers, A History. University Press of Virginia, 1995. A detailed description of the collection is available via pdf on our website at www.brickrow.com on the catalogues page.. The Language of Flowers phenomenon flourished for almost eighty years, beginning in France in the early 19th century. As both potent and subtle symbols in Western culture, flowers are found in religious texts, poetry, heraldic, and emblematic literature from the classical period and early Christianity, through medieval literature and the enlightenment. In the early 19th century books were written and published for the first time under titles such as AbÃ©cÃ©daire de Flore ou Langage des Fleurs (1811), Oracles de Flore (1816), Emblemes de Flore et des VÃ©gÃ©aux (1819) and Le Langage des Fleurs (1819). With those publications, the language of flowers and its exploration of floral symbolism in communication - usually as a language of love and romance - gained acceptance and popularity. During its nascent years in France, the language of flowers had a relatively limited, affluent audience, but once publishers saw the potential for profit and obtained the ability to print and illustrate books on a large scale, they began to publish language of flowers texts in the popular formats of literary annuals, gift books, and almanacs. By 1830, the genre was widely available to a new world of fervent book buyers and readers in the working and middle classes. The vogue for language of flowers books was so prevalent that it became the subject of parodies and satires by, among others, Frederick Marryat and J. J. Grandville. Herman Melville was a devotee of symbolic flower language and referred to it in Mardi and Pierre and poems written to his wife Lizzie. The core of this collection of language of flowers titles was assembled by Doris Ann Elmore, a French teacher in San Francisco and lifelong Francophile. The collection is unusual for its scope. The collection is for sale en bloc. (Inventory #: 28459)
$25,000.00 add to cart or Buy Direct from
Brick Row Book Shop
Share this item

An Essay on Mr. Pope's Odyssey. In Five Dialogues . . . The Second Edition

Divine Dialogues, Containing Sundry Disquisitions & Instructions Concerning the Attributes and Providence of God . . . Collected and Compiled by the Care and Industry of F. P.

London: Printed by James Flesher, 1668 , 1668
(click for more details about Divine Dialogues, Containing Sundry Disquisitions & Instructions Concerning the Attributes and Providence of God . . . Collected and Compiled by the Care and Industry of F. P.)
View all from this seller>