A Book of Common Prayer. 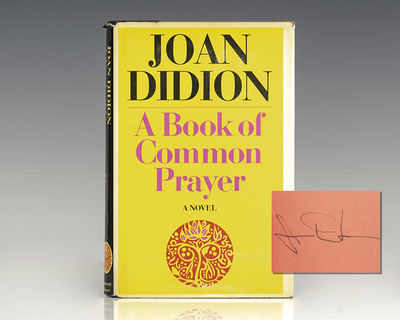 by Didion, Joan
New York: Simon & Schuster, 1977. First edition of Didion's fourth book. Octavo, original half cloth. Boldly signed by Joan Didion on the front free endpaper. Fine in a near fine dust jacket. Jacket design by Janet Halverson. A nice example. Writing with the telegraphic swiftness and microscopic sensitivity that have made her one of our most distinguished journalists, Joan Didion creates a shimmering novel of innocence and evil. A Book of Common Prayer is the story of two American women in the derelict Central American nation of Boca Grande. Grace Strasser-Mendana controls much of the country's wealth and knows virtually all of its secrets; Charlotte Douglas knows far too little. "Immaculate of history, innocent of politics," she has come to Boca Grande vaguely and vainly hoping to be reunited with her fugitive daughter. As imagined by Didion, her fate is at once utterly particular and fearfully emblematic of an age of conscienceless authority and unfathomable violence. "An articulate witness to the most stubborn and intractable truths of our time, a memorable voice" (Joyce Carol Oates, The New York Times Book Review). (Inventory #: 122953)
$850.00 add to cart or Buy Direct from
Raptis Rare Books
Share this item