(Sketch I No. 3) Galveston Entrance Texas 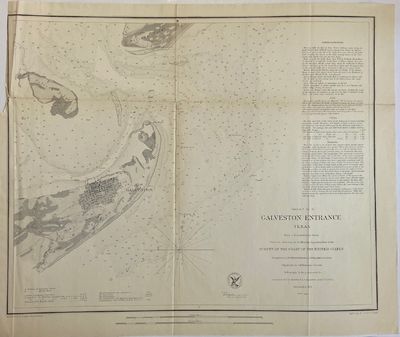 by BACHE, A.D. & U.S. COAST SURVEY
Washington: Government Printing Office, 1853. unbound. Sea chart. Uncolored engraving. Image measures 15 3/8" x 18 7/8" This important nautical chart or maritime map depicts the city of Galveston and surrounding waters in 1853, connecting the Galveston Bay to the Gulf of Mexico. Includes Galveston Island, Pelican Island, and Bolivar Point. The chart notes depth soundings throughout to help navigate the waters. Sailing directions and tidal remarks are included. The city of Galveston is shown with impressive detail, featuring the city grid with distinguishable structures, as well as roads and land plots in peripheral parts of the island. This map was issued by the U.S. Coast Survey under the supervision of A. D. Bache, Superintendent. Triangulation by R.h. Fauntleroy and J.S. Williams, and topography by J.M. Wampler, Hydrography under the command of T.A. Craven & A.S. Baldwin, Lieuts. U.S. Navy. This map is in very good condition. Minor toning along original fold lines. Alexander Dallas Bache (1806-1867) was an incredibly prolific surveyor, who worked as the superintendent of the United States Coast Survey, which was first established in 1807. Over the course of the 19th century, the survey worked closely with the U.S. Navy to produce sea charts of the country's waters that could serve scientific as well as military functions. (Inventory #: 298957)
$250.00 add to cart or Buy Direct from
Argosy Book Store
Share this item

Amsterdam : Jansson, J. , 1662
(click for more details about Lumen Historiarum per Occidentem)
View all from this seller>