THE GOSPEL OF MATTHEW: AN EXPOSITION 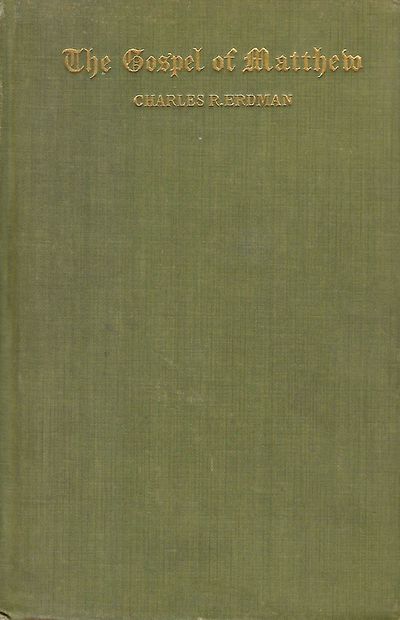 by ERDMAN, Charles H.
Philadelphia: The Westminster Press, 1933. Later Edition. First Edition published in 1920. Signed inscription by Erdman on the front endpaper: "Your sincere friend, Charles R. Erdman." Charles Rosenbury Erdman, Sr. [1866-1960] was an American Presbyterian minister and professor of theology at Princeton Theological Seminary. He served as pastor of Overbrook Presbyterian Church in Philadelphia from 1891 to 1897, and then at First Presbyterian Church in Germantown from 1897 to 1906. He joined the faculty at Princeton Theological Seminary in 1905, where he served as professor of practical theology until his retirement in 1936. During that time, Erdman was elected the Moderator of the General Assembly of the Presbyterian Church in the United States of America in 1925, and also served as pastor of First Presbyterian Church in Princeton, New Jersey from 1924 to 1934. 12mo., olive-green cloth, stamped in gilt; 224 pages. Very Good (covers nice but for tiny light stain lower edge rear cover; contents clean & tight with former owners ownership stamp on front pastedown & front endpaper). (Inventory #: 57356)
$45.00 add to cart or Buy Direct from Antic Hay Books
Share this item
Antic Hay Books
Offered by