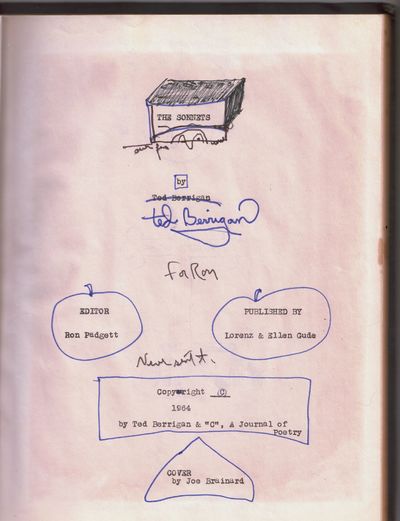 by BERRIGAN, Ted & Ed SANDERS
N. Y.: Lorenz & Ellen Gude, 1964. First edition. Limited to 300 copies. A curious copy, one of Berrigan's retained copies, presumably bound at his direction, and originally intended for Berrigan's close friend and editor of this book, the poet Ron Padgett. The title-page is signed by Berrigan below his printed name, and embellished in characteristic fashion by him: at the top of the page, surrounding the title, Berrigan has drawn Kilroy, one of his favorite cartoon characters; each of the printed sections of the title-page is also either boxed or circled by a figure resembling an apple. The title-page bears Berrigan's inscription "For Ron" and a few inches below, his note "Never sent it." [Ron Padgett suggests that he (Padgett) may have been out of town at the time of Berrigan's original intention.] On the next page, the dedication page, around the printed dedication to Joe Brainard, Berrigan has drawn a cross carried on a truck; and at the top of the page, there is an "Ouch" glyph drawn by Ed Sanders who is known for such drawings. Berrigan has corrected the text in four places, and he has annotated the biographical information on the colophon page: changing his birthday to December 7th, 1941, the day Japan attacked Pearl Harbor - "a day that will live in infamy"; he has crossed through the word "serving" in the sentence "In 1954, he entered the U. S. Army, serving until 1957", and put the word serving in quotation marks; in the sentence, "He now lives in New York city with his wife and son . . ." he has added the words "& Daughter & Ed Sanders". In addition, in the margin, Berrigan has added notes on a number of subsequent works, including The Sonnets (Grove Press, 1967); Bean Spasms (Kulchur, 1967), a collaboration with Ron Padgett, and another collaboration with Padgett that was never published, "The Furtive Days (A Novel)", among others. In the colophon, where this copy's number is to be specified, Berrigan has written "800". Finally, on the verso of the dedication page, Berrigan has pasted a photostatic reproduction of a collage of photographs of himself. A row of the page numbers in the book is written on the rear endpaper, perhaps by the binder. A few small and shallow stains on the fore-edges of the pages, offsetting from the frontispiece, corners very slightly rubbed. 4to, original pictorial wrappers, rebound in navy blue cloth with a red plastic title-label on spine. A few small and shallow stains on the fore-edges of the pages, offsetting from the frontispiece, corners very slightly rubbed. (Inventory #: 23331)
$4,000.00 add to cart or Buy Direct from
James S. Jaffe Rare Books
Share this item
James S. Jaffe Rare Books
Offered by