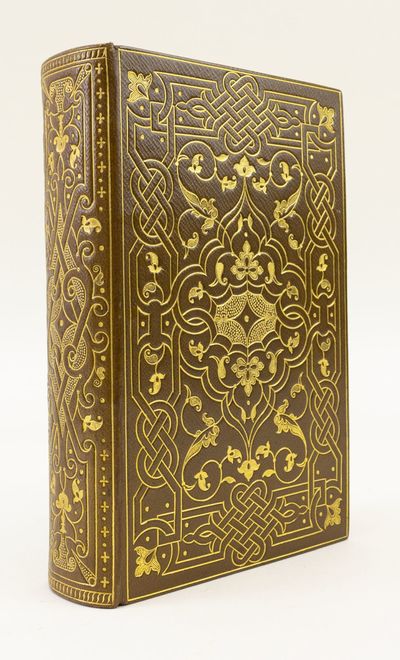 by (BINDINGS - BEDFORD). (PICKERING IMPRINT). BOCCACCIO, GIOVANNI
London: [Printed by S. & R. Bentley for] Guglielmo [William] Pickering, 1825. First Foscolo Edition. ONE OF "A FEW COPIES" PRINTED ENTIRELY ON INDIA PAPER, according to Keynes. 198 x 124 mm. (7 3/4 x 4 7/8"). 2 p.l., cxxxv, [1] (blank), 967 pp. Three volumes bound in one. Edited by Ugo Foscolo.
DAZZLING TAN MOROCCO, VERY ELABORATELY GILT, BY F. BEDFORD (stamp-signed on front turn-in) COVERS AND SMOOTH SPINE INTRICATELY TOOLED IN A GROLIERESQUE DESIGN OF INTERLACING STRAPWORK and azured-leaf vines, gilt-ruled turn-ins, ALL EDGES gilt and GAUFFERED in a complex repeating fleur-de-lys pattern. In the original brown morocco pull-off box with complementary gilt tooling on the back. With engraved frontispiece portrait and 10 plates after Stothard. Front flyleaf with newspaper clipping of Bedford obituary tipped on. Keynes, p. 43. Leaves a shade less than bright, occasional minor foxing or browning (more pronounced in a couple of quires), otherwise excellent internally (fresh, and with no signs of use), and THE REMARKABLE BINDING IN PRISTINE CONDITION.

This is a volume with two powerful assets: it is beautifully bound by Francis Bedford to a memorably intricate design, and it is the rarest version of Pickering's excellent edition of a masterpiece of Italian literature, being printed entirely on India paper. It has always been the most expensive and least encountered issue; according to Keynes, there were four variants: (1) on laid paper, (2) three volumes in red cloth (sold for £2 12s. 6d. with engravings and £1 11s. 6d. without); (3) on Large Paper with proof impressions of the plates (at £4 14s. 6d.); and (4) "a few copies" printed entirely on India paper (for £6 16s. 6d). Today, copies of the basic three-decker are not uncommon, but RBH and ABPC find just half a dozen copies of the large paper edition at auction in the past half century (two of these the Hoe copy), and no copies (except ours) of our India paper printing.

The Pickering Boccaccio was edited by Italian poet, scholar, and patriot Ugo Foscolo (1778-1827), who added an important critical essay on Boccaccio's influence on Italian language and literature, and was embellished with engravings by the most in-demand book illustrator of the day, Thomas Stothard (1755-1834). Although William Pickering (1796-1854) began his legendary publishing career in 1820, it wasn't until 1825, after a move to larger premises, that he began to produce substantial numbers of high-quality editions. "The Decameron" is praised by Britannica as "[s]tylistically . . . the most perfect example of Italian classical prose," and in his introductory essay here, Foscolo traces its influence on vernacular Italian and its place as a linguistic model for Italian writers.

Binder Francis Bedford (1799-1883) managed the firm of Charles Lewis for five years for the latter's widow and then was in a partnership for 10 years with John Clarke before establishing his own bindery in 1851. He shortly became recognized as the leading binder in the fashionable West End of London, and his firm enjoyed prosperity not only until his death, but for 10 years afterwards, under the ownership of Joseph Shepherd. Bedford bindings are almost always elegantly traditional in their design and elaborate in their gilt decoration, as the present example demonstrates. Here, Bedford has taken inspiration from the 16th century entrelac style favored by the great bibliophile Jean Grolier (ca. 1489/90-1565), whose collection was renowned for its richly embellished bindings.. (Inventory #: ST16434)
$13,000.00 add to cart or Buy Direct from
Phillip J. Pirages Fine Books
Share this item