A Variety of Fallon [*SIGNED*] 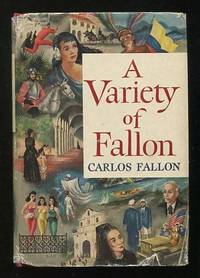 by Fallon, Carlos
Boston: Little, Brown and Company. Very Good in Very Good dj. 1950. 2nd printing. Hardcover. (price-clipped) [slight bumping to all corners, very slight fraying to a couple, otherwise a nice clean copy with only minor shelfwear; the jacket has several old internal tape repairs along the top and bottom edges, shallow chipping and some wrinkling at both ends of spine, a few tiny tears and associated creasing along both top and bottom edges]. INSCRIBED and SIGNED by the author on the front endpaper: "To Henny / with affectionate / regards / Carlos Fallon." Uncommon memoir by a man who was a popular and well-known lecturer in his day, but who has subsequently faded into near-total obscurity. The author was born in Colombia, to a prominent family with Irish and Castilian roots; his early childhood was spent in Bogotá, but as an adolescent and teenager he lived in New Orleans, where his father was the Colombian consul. Returning to Colombia as an adult, he served for ten years in the country's navy (as a "secret agent" of some description), eventually rising to the position of Chief of Staff. He resigned in 1941, ostensibly (per one news item of the day) "to dedicate himself to scientific work on anthropology, philology and Indian folklore," but he also returned to the U.S. where he became an immediate hit on the lecture circuit, holding forth on topics related to social, economic and political conditions in South America -- serving, as one contemporary newspaper article put it, "as an interpreter of the psychology of our Latin neighbors to American audiences." He soon ended up in the U.S. Army (either enlisting in the wake of Pearl Harbor or being drafted; accounts differ), eventually rising to the rank of Captain in the Intelligence Division of the Air Force. Post-war, he traveled quite a bit and apparently did some kind of "trade survey" of South America before resuming his lecturing activities. By all accounts he was a witty and charming raconteur, an impression heartily reinforced by this book, which is as much about his colorful forebears -- including "the great conquistador Don Gonzalo de Quesada" -- as it is about himself. His book was no doubt an important piece of self-promotion, published as it was in late 1950, when had been back on the lecture circuit for only about a year, but that hardly lessens either its value either as an entertaining chronicle of a varied and interesting life, or as an almost-anthropological account of a non-native boy navigating American culture (and the Creole and Cajun subcultures of Louisiana) in the 1920s, or as an historical record of his exploits during the border-dispute war between Colombia and Peru in 1932. (A war I never even heard of until I encountered this book.) Ah, but fame is fleeting -- although I was able to find numerous accounts of his lectures during the early and mid-1950s, from Maine to California (and numerous points between), from about 1956 onward he seems to have virtually dropped off the map. (There are a number of news items about a "Carlos Fallon" who was a manager of value analysis with RCA during the 1960s, but unless he made a major career-switch, this seems to have been an entirely different guy, who lectured on such scintillating topics as "Valve Engineering -- Past and Future." Duly noted, however, that OCLC and LoC do think it's the same guy.) Finally, a Google search turned up a single hit -- a "Capt. Carlos Fallon," who died in February 1989 and is buried in Southport, North Carolina. A photo of his grave marker confirms that it's our author -- "Capt., U.S. Army Air Corps, World War II" -- but what was he doing for the last thirty years of his life, I wonder? Signed by Author . (Inventory #: 26637)
$50.00 add to cart Available from ReadInk
Share this item
ReadInk
Offered by