THE PLEASURES OF JAPANESE LITERATURE 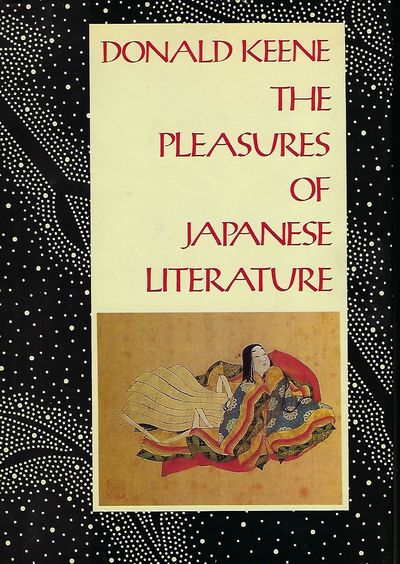 by KEENE, Donald
NY: Columbia University Press, 1988. First Edition, second printing. Signed presentation from Keene on the title page to author Hortense Calisher and her husband: "22 April 1989. To Hortense and Curt, Donald Keene." With a page of notes laid-in, maybe in Harnack's hand? Hortense Calisher [1911-2009] was an American writer of fiction and the second female president of the American Academy of Arts and Letters. She was a finalist for the National Book Award three times, won O. Henry Awards (for "The Night Club in the Woods" and other works) and the 1986 Janet Heidinger Kafka Prize (for The Bobby Soxer), and was awarded Guggenheim Fellowships in 1952 and 1955. She was elected a Fellow of the American Academy of Arts and Sciences in 1997. Curtis Arthur Harnack [1927-2013] was an American writer and involved with the artists' community Yaddo in Saratoga Springs, New York, serving as the community's president between 1971 and 1987. Donald Lawrence Keene [1922-2019] was an American-born Japanese scholar, historian, teacher, writer and translator of Japanese literature. He was University Professor emeritus and Shincho Professor Emeritus of Japanese Literature at Columbia University, where he taught for over fifty years. 8vo., mustard-colored cloth in dust jacket; 133 pages. Very Good (covers nice & bright; contents clean & tight);very nice d/j. (Inventory #: 57360)
$75.00 add to cart or Buy Direct from Antic Hay Books
Share this item
Antic Hay Books
Offered by