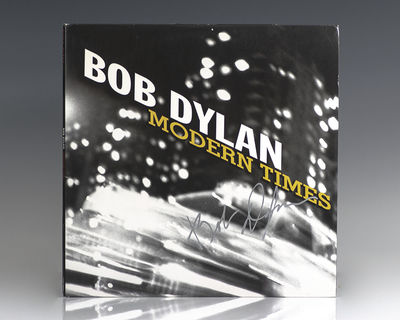 by Dylan, Bob
New York: BMG & Columbia Records, 2006. First pressing of this album by the Nobel Prize-winning author. Quarto, 2 original vinyl records. Boldly signed by Bob Dylan on the front panel. In fine condition. Rare and desirable signed. Release on August 26, 2006 by Columbia Records, Dylan's Modern Times was the third work (following Time Out of Mind and Love and Theft) in a string of albums by Dylan that garnered wide acclaim from critics. It continued its predecessors' tendencies toward blues, rockabilly and pre-rock balladry, and was self-produced by Dylan under the pseudonym "Jack Frost". Modern Times became Dylan's first No. 1 album in the U.S. since 1976's Desire and was also his first album to debut at the summit of the Billboard 200, selling 191,933 copies in its first week. At age 65, Dylan became the oldest living person at the time to have an album enter the Billboard charts at No. 1. n the 2012 version of Rolling Stone magazine's list of "The 500 Greatest Albums of All Time", Modern Times was ranked at No. 204. (Inventory #: 122328)
$5,500.00 add to cart or Buy Direct from
Raptis Rare Books
Share this item