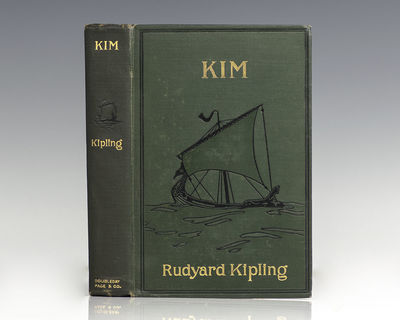 by Kipling, Rudyard
Garden City, NY: Doubleday, Page & Company, 1922. First edition with the chapter-heading rhymes for only chapters VII and VIII as called of what many consider Kipling's masterpiece. Octavo, original cloth, embossed black and gilt to the front panel, gilt titles to the spine, illustrated. In near fine condition with light rubbing to the extremities. An exceptional example. Kim unfolds against the backdrop of The Great Game, the political conflict between Russia and Britain in Central Asia. The novel made the term "Great Game" popular and introduced the theme of great power rivalry and intrigue. It is set after the Second Afghan War which ended in 1881, but before the Third, probably in the period 1893 to 1898. The novel is notable for its detailed portrait of the people, culture, and varied religions of India. "The book presents a vivid picture of India, its teeming populations, religions, and superstitions, and the life of the bazaars and the road." Considered by many to be Kipling's masterpiece, opinion appears varied about its consideration as children's literature or not. Roger Sale, in his history of children's literature, concludes "Kim is the apotheosis of the Victorian cult of childhood, but it shines now as bright as ever, long after the Empire's collapse." Named by Modern Library as one of the 100 best English-language novels of the 20th century. In 2003 the book was listed on the BBC's The Big Read poll of the UK's "best-loved novel." (Inventory #: 122738)
$450.00 add to cart or Buy Direct from
Raptis Rare Books
Share this item

New York : Coward-McCann , 1931
(click for more details about August.)
View all from this seller>