PRINTED LYRICS FOR THOMAS DARTMOUTH RICE'S "JUMP JIM CROW," adapted from traditional "plantation" music, cut into strips, evidence of old hand-stitching at left margins, once connected together to form a "book," and erratically numbered in ink on versos of the strips 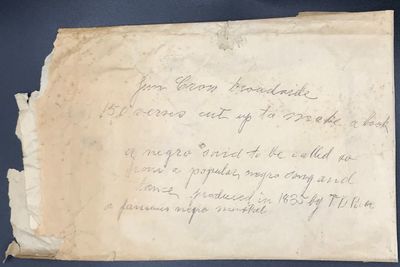 by [Rice, Thomas Dartmouth]
[NP: np, 1835. Ten strips of period printed lyrics, in dialect, cut in various lengths, from 12 1/4 to 1 1/2 in., all roughly 2 in. wide. Two strips strengthened with old cello tape, one preserves some amateurish stitching, all have uneven stitch marks in their left margins, as evidence they were once bound together. Most of the strips are numbered in ink on versos, a few ink spots affecting a bit of the text. The group folded into a larger sheet of thin tan [wrapping?] paper, chipped and worn, annotated in ink in an uneven hand: "Jim Crow broadside 150 verses cut up to make a book a negro said to be called so from a popular negro song and dance produced in 1835 by T.D. Rice a famous negro [sic] minstrel." A small clipped printing of a letter from Pres. Abraham Lincoln to Major General [Nathaniel P.] Banks, dated Washington, DC, Dec. 2, 1864, regarding Lincoln's order to send Banks to "perform the part of advancing the new State government of Louisiana...." is laid in with the printed lyrics. Thomas Dartmouth "Daddy" Rice (1808-1860) was considered the "Father of American Minstrels." In Russell Sanjek's book "American Popular Music and its Business: The First Four Hundred Years," [NY: 1988], volume two, he notes that Thomas Dartmouth "Daddy" Rice created "the first American stage character rooted in black contemporary culture, Jim Crow...." This character emerged out of the frontier theater as "Daddy" Rice performed in blackface along the Kentucky and Ohio show-business trail. Rice worked for Sol Smith along the Ohio River circuit, first as a stage hand and then as a singer and actor. During this time he apparently observed an old black slave named Jim who belonged to a local white family named Crow, working at a stable at the rear of a Cincinnati theater. The slave's deformed shoulder and leg caused him to move stiffly, and his habit of singing his own tunes and pivoting on one heel was a source of inspiration to Rice. "Blackface comedy and singing had already become popular, but Rice discovered something new in Jim's singing and dancing. After borrowing clothing from a hotel porter for his first appearance in 'The Rifle,' Rice blackened his face, put on a black curly wool wig, and went onstage to perform Jim's song and imitate his grotesque but comic dancing." As his fame increased, he recognized the need to put his songs into print. W.C. Peters worked with Rice to produce printed sheet music for "Jim Crow" in 1830. Rice's successes out west with his blackface persona eventually brought him back to New York City where he had been born. In 1832 he performed his act at the Bowery Theater to popular acclaim, and in 1836, took his production to England. By the 1840s his popularity began to wane and people complained they could not find copies of the sheet music for "Jump Jim Crow."
Rice's song eventually came to include 150 verses. The printed strips of lyrics include all but about ten of these, perhaps indicating that when the stitching broke, one strip was lost. (Inventory #: 65552)
$650.00 add to cart or Buy Direct from
Bartleby's Books
Share this item