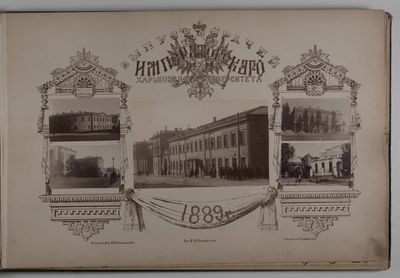 This beautifully produced commemorative photo-album celebrates the 1889 graduates of the Medical School of the Imperial Kharkiv University. Comprised of a total of 160 original b/w photographs containing portraits of the graduating students and faculty of the medical school, as well as a few images of the facades of university buildings, the images are mounted on decoratively designed heavy stock leaves. The photography is credited to early Kharkiv photographer Mikhail Ivanovich Ovchinnikov. The name of one of the graduating students S.G. Agamirzov* (Semyon Gerasimovich Agamirzov), appears on the front cover, so it is possible that this album was his copy (he appears in the 3rd portrait from the left on the top row of the 4th leaf). The title leaf includes 5 mounted images of exterior shots of the medical school buildings. The second leaf contains 13 portraits of faculty members.The following leaf contains an additional 12 faculty portraits, plus two more small images of the campus at the bottom. The remaining 6 leaves contain portraits of 128 graduating doctors, with only their last name captioned in most instances.

Of these 128 students, it is possible that 51 or more (nearly 40%) were Jewish. It is interesting to note that this album dates from a period when Jews were starting to become comparatively more accepted in Russian society and were allowed more educational and career opportunities, in the wake of the Jewish enlightenment (Haskalah), and after various Russian-state social and legal reforms had taken place.

Titles and captions throughout in Russian.

Binding with some rubbing and chipping to extremities. Covers with some scratches, smudging and a few light abrasions. Interior with starting along the gutter of the fifth leaf. The leaves themselves rather clean and vibrant, with the exception of some minor age toning. Binding in good+, interior in very good- condition overall. Extremely scarce. *Semyon Gerasimovich Agamirzov's name appears in text from 1901 discussing the the medical staff of the Mikhailovskaya Hospital in Baku, Azerbaijan. He is listed as a "Holy staff resident" of the hospital. He is also listed in another period document as a resident of that city. No other information is known.

You Can Judge a Book by its Cover: A Brief Survey of Materials [SIGNED]

Pico Rivera : Kater-Crafts Bookbinders , 1994
(click for more details about You Can Judge a Book by its Cover: A Brief Survey of Materials [SIGNED])
View all from this seller>