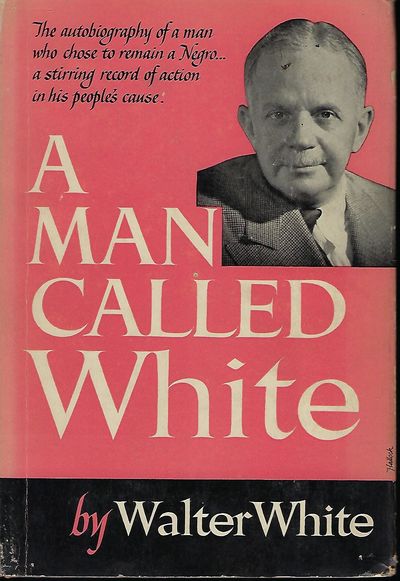 by WHITE, Walter
NY: The Viking Press, 1948. First Edition. Signed by White on the front endpaper. Walter Francis White was born in Atlanta, Georgia, on July 1, 1893. Before he became president of the United States, William Henry Harrison fathered several children with one of his slaves. One of these children was Walter White's grandmother, making Harrison Walter White's great-grandfather. In 1906, he was a witness to race riots in Atlanta, and saw his home come close to being destroyed. He only escaped the violence of the day because he was light-complexioned, with blonde hair and blue eyes. Though White had blonde hair and blue eyes, he embraced his African-American heritage and fought to end the discrimination that surrounded his community. As a member of the NAACP, White investigated lynchings and worked to end segregation. He later became the organization's executive secretary from 1931 to 1955. This book is his scarce autobiography. With an original 1963 NAACP membership card (duplicate) laid in. An ex-library copy but a very nice one [see description]. 8vo., decorative grey cloth in original dust jacket; 382 pages. Good (little wear & minor discoloration binding, with call number on spine of book & dust jacket; contents clean & tight). One perforated library blind stamp of the Franklin, New Hampshire, public library on the title page. The flaps of the original dust jacket, which has moderate wear & some sunning spine) was attached to the pastedowns but I have neatly detached it, leaving only minor wear to the endpapers & d/j. Minor evidence of circulation pocket removed on rear pastedown. This is a scarce title, especially signed, and this is a very acceptable copy! (Inventory #: 57365)
$250.00 add to cart or Buy Direct from Antic Hay Books
Share this item
Antic Hay Books
Offered by

THE BUMP ON SANTA'S NOGGIN: HOW SANTA ALMOST FORGOT CHRISTMAS

[Ann Arbor, Michigan] : Mitten Press , 2006
(click for more details about THE BUMP ON SANTA'S NOGGIN: HOW SANTA ALMOST FORGOT CHRISTMAS)
View all from this seller>