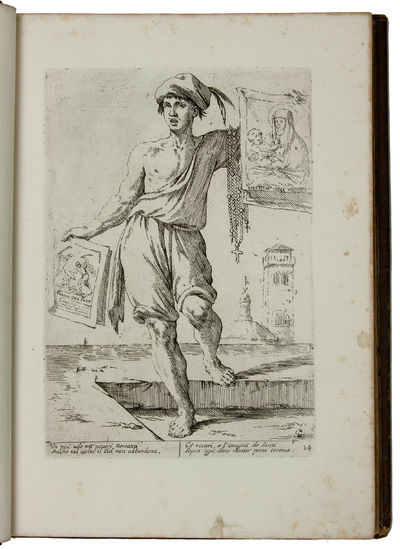 
Rare complete suite and an unusually fine copy of the quintessential 17th-century Italian Cry book, creatively adapting depictions of Bologna trades by Caracci made at the end of the 16th century into a full-fledged book of cries. Caracci's drawings were engraved by Simon Guillain in 1646 under the title of Diverse Figure, but as these lacked any text, it was more strictly a book of trades. The present adaptation by Mitelli contains the cries for the first time.
"Mitelli was an able and imaginative artist and an early political and social caricaturist who not only drew the images but wrote the verses as well...The images have much of the spirit of Caracci's, and for the most part adopt his motifs but they are nonetheless his own, no figure being close enough to his model's to be called a copy." - Beall, p. 321.
The NUC lists two copies, the Free Library of Pennsylvania and New York Public (2 copies or a redundant record?).
The issues or states of the Mitelli have not been clearly defined, perhaps because copies exhibit a surprising degree of variation. The present copy agrees with Beall I.5 in the form of the printer's name on the title, 'Jacomo Rossi... cum privil'', and for having the first appearance of numeration on the plates, but diverges in lacking the formula "cum privil." printed on the individual plates. This would suggest an intermediary state between I.4 and I.5.
The present copy also includes a complete set of etchings by Mitelli after the decorations by Caracci in the Palazzo Fava in Bologna, L'Enea vagante Pitture del Caracci (Rome 1663) and an incomplete set of etchings by P. Aquila Heroica virtutes imagines, also after Caracci.*Beall p. 332, I.5; Lipperheid Jba 18; A. Vianelli, ed., Le arti per via a Bologna di Giuseppe Maria Mitelli (1969). (Inventory #: 1581)
$22,500.00 add to cart Available from Martayan Lan
Share this item
Martayan Lan, Inc.
Offered by