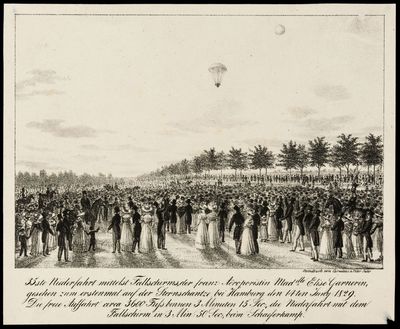 
Extremely rare ephemeral Bosinada [popular verse in Milanese dialect – see below] in honor of Sophie Blanchard (1778–1819), the first professional female balloonist on the occasion of her solo flight August 15, 1811, organized for the celebrations of Napoleon's birthday in Milan. The balloon left Milan on the evening of August 15, for a night flight--which she preferred--but due to strong winds was forced to land near Genoa.
Blanchard began ballooning with her husband Jean-Pierre, an aeronaut himself. Highly unusual for being a female balloonist, the "novelty" attracted large audiences and considerable financial returns. She soon built a solo career and became the first professional female aeronaut, and a favorite of the Emperor who named her "aeronaut for official holidays" in 1804. Napoleon consulted her regarding plans for his invasion of the United Kingdom, as he was seriously considering the use of balloons. Blanchard dissuaded him due to the intensity of the winds, but the idea had great international resonance. Sophie died in 1819 in an accident when her balloon caught fire over Paris.
[WITH:] [GARNERIN ELISA] El vol in del ballon che Madamisella Garnerin l'ha de fa in l'arena el dì 9 de Magg dell'ann 1824. - Milan, dal stampador e libree Manin, 1824. 8vo. 8 pages. Bound in modern paper boards. Some occasional light foxing; an uncut and genuine copy.
This bosinade describes the second occasion – after the first of its kind which took place in Milan on March 5,1824 – of Elisa Garnerin's parachute jump into the Milan Arena. This was her 23rd jump. Garnerin (1791-1839), who came from a family of famous French balloonist, is considered the first professional skydiver and a shrewd businesswoman. She made her first jump when only 15, and performed at least 39 times throughout Europe, including Italy, Spain, Germany and Russia, to large crowds.
Both texts are written in a traditional popular poetic genre, in Milanese dialect, called bosinada or bosinata which are short poems often satirical and funny inspired by current events. They were recited by storytellers called bosin. This popular and naïve genre which developed in the 18th century became a rage with a large following in the 19th century attracting a broad range of social strata for an audience. Very much in the oral tradition, printed bosinade transcripts were meant to be ephemeral, used to follow the wording of the minstrels and often discarded after the show -- very much like a program -- and are consequently very rare.
[AND WITH:] SUHR ( Cornelius and Peter). 35ste Niederfahrt mittelst Fallschirms, der franz. Aeroporistin Madme Elise Garnerin, gesehen zum erstenmal auf der Sternschantz bei Hamburg den 14ten Juny 1829. Die freie Auffahrt circa 3600 Fuss binnen 3 Minuten 15 Sec., Die Niederfahrt mit dem Fallschiref in 3 Min: 50 Sec, beim Schaeferkamp. Hamburg, Suhr, 1829. Lithograph in black and white measuring 17 x 20.5 cms. (image size); tiny tear to the upper right corner, otherwise very good.
A lithograph depicting the parachute descent of Elisa Garnerin on the Sternschantz near Hamburg on June 14th 1829. The free jump from approximately 3600 feet took 3 minutes and 15 seconds. The skydive of the famous parachutist- depicted in the air just after her jump- was followed by a large crowd of spectators entertained by the unprecedented spectacle documented here.
The Suhr brothers, Cornelius (1781-1857) and Peter (1788-1857), were prolific publishers of lithographs, engravings, and etchings depicting daily life and special events in Hamburg. Their prints shape the term Hamburgensie to used to this day.
*F. Cherubini, "Collezione delle migliori opere scritte in dialetto milanese", (1816-17), vol. I p. LXV. G. Ferrero, "Sophie Blanchard, amazzone del cielo, in Val Trebbia", pp. 16-41.G. Chiappori, "Continuazione Della Serie Cronologica Delle Rappresentazioni Drammatico-Pantomimiche Poste Sulle Scene dei Principali Teatri di Milano", (1818) pp. 163-164. (Inventory #: 6041)
$2,500.00 add to cart Available from Martayan Lan
Share this item
Martayan Lan, Inc.
Offered by