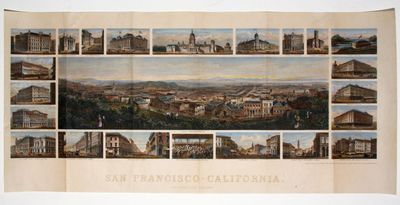 Scarce; separately published. A wonderfully detailed, panoramic view of the city seen from Nob Hill, with the ship-filled bay in the far background. Surrounding the primary view are 22 finely engraved vignettes depicting notable structures, lively streetscapes, and even a chaotic scene on a wharf featuring a brawl. The work overall provides a vital visual record of pre-earthquake San Francisco. It reveals that by the 1870's the city had already become a remarkably sophisticated place with many large, ornate buildings and improved streets. The vignettes depict banks, churches, and some surprisingly large and elaborate hotels. One shows the original Cliff House, built in 1863, set on its dramatic perch above the bay. An interesting feature appearing in some of the vignettes are horse drawn trolley cars riding rails; these were precursors to the city's famed cable cars. It is, in fact, this kind of quotidian detail, conveying a vivid sense of life as lived at the time, which sets this work apart from most other early views. In fact, when studied under magnification, the vignettes assume a vibrant life of their own that is quite uncanny.
It is quite likely the map's publisher was the same Frederick Hess, who was at the time a publisher and editor of German language newspapers in San Francisco. In 1858, he purchased the California Demokrat, the oldest daily on the Pacific coast.
Reps (see reference below) located just two examples of the view—in the Library of Congress and the Oakland Museum.