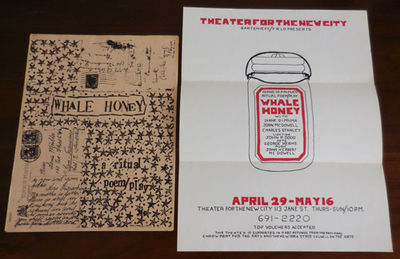 by Beats - di Prima, Diane
New York: Privately Printed, No Date. First edition. Paperback. Good. Sold here together are two related items. The first is a 4 page program with cover design by George Herms for Whale Honey, a surrealist verse play written by Beat poet Diane Di Prima. The program is printed on rectos only and has been SIGNED BY DI PRIMA on the title page. The program is not dated, but from references within the notes it appears to have been performed in the mid-70's. The cast included Jackson Allen, Diane Di Prima, John Herbert McDowell and Tara di Prima. George Herms designed the set. The second item is a large folded sheet of paper. A poster for Whale Honey performed at the Theater For The New City on Jane Street in NYC. The dates of the show were April 29 - May 16 (year not stated). Folded for mailing else in fine condition. These Jane Street performances were likely done at a later date than when the program was printed. The condition of the program is only good as it was used by someone(s) to write various notes to themselves. Sold in as-is condition. A couple of pieces of uncommon beat ephemera for the di Prima completist. (Inventory #: 30739)
$250.00 add to cart or Buy Direct from Derringer Books
Share this item
Derringer Books
Offered by

Germany : Lukas & Sternberg , 2002
(click for more details about Gebarden und Ausdruck)
View all from this seller>