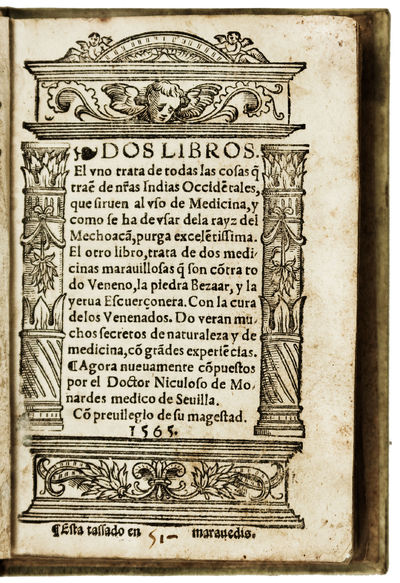 by [AMERICANA] / [BOTANY] / [MEDICINE]/. MONARDES, Nicolás.
"FOR MANY YEARS THE MOST IMPORTANT WORK ON THE MEDICINAL PLANTS OF THE NEW WORLD"
8vo [13.4 x 9.1 cm], (132) ff., with woodcut border to title page and woodcut initials. Bound in later stiff vellum, title stamped on spine, gift inscription on the front flyleaf to a certain 'Carmen Ballina' dated 1922 (now covered in paper). Only minor wear and rubbing to binding. 'Tassa' price of 51 maravedis entered in manuscript on title page as issued, early signature of a certain 'Henrique Correa' at fol. aiiir, the occasional contemporary annotation in the text, minor occasional dampstaining, very minor occasional marginal worming.