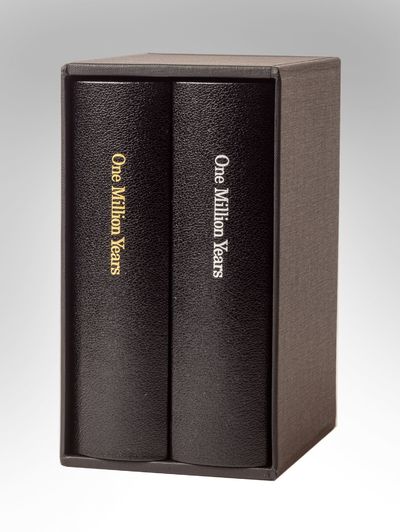 by KAWARA, On
2 p.l., 2001; 2 p.l., 2001 pp. Two vols. Small 4to (152 x 118 mm.), orig. black cloth over semi-stiff boards, gilt & silver lettering on upper covers and spines, housed in a cloth-covered slipcase. [Brussels]: Editions M. Szwajcer & M. Didier, 1999. The scarce artist's book revisiting On Kawara's One Million Years. A total of 570 copies of this work were printed: 60 numbered and signed, 10 artist's proofs, and 500 numbered; this is one of the numbered copies (no. 98). The first volume, "Past" (998031 BC to 1969 AD), begins with the phrase, "For all those who have lived and died." The second volume, "Future" (1993 AD to 1001992 AD), commences with "For the last one." Both then proceed at a rate of 500 years a page. Each page is carefully laid out so that the years on subsequent pages line up exactly and are not visible through the translucent 32g Bible Veritable Ivory paper. "In this version of the original multivolume book...the pages have been reduced and printed on wispy, transparent thirty-two gram sheets, so that each page containing its grid of five hundred years must flawlessly align with the visible numbers on the page beneath it. Mimicking the aesthetics of a pocket Bible, this edition evokes portability, as though the unending columns of numbers might need to be close at hand for easy reading. Like the I Went, I Met, and I Read books, which do not exactly invite traditional reading, such a form would seem quietly ironic."-Claire Lehmann in Artists Who Make Books, pp. 141 & 145. As new. WorldCat records only five American institutions with examples of this work. â§ Roth, Aarons, & Lehmann, eds., Artists Who Make Books (2017), pp. 141 & 143 (pictured). See also the Guggenheim's 2015 exhibition catalogue Silence, pp. 162-67, for an explanation of the original work, its creation, and its various iterations. (Inventory #: 7556)
$3,750.00 add to cart or Buy Direct from
Jonathan A. Hill, Bookseller
Share this item
Jonathan A. Hill, Bookseller, Inc.
Offered by

by ZHILI (or SIMING ZHILI)


(click for more details about J.: Jippu [or Jufu] nimon shiyo sho [Ch.: Shibu'er men gen zhi yao chao; Exposition of The Essentials of the Ten Gates of Non-Duality])
View all from this seller>