How to Make a Cat Trap 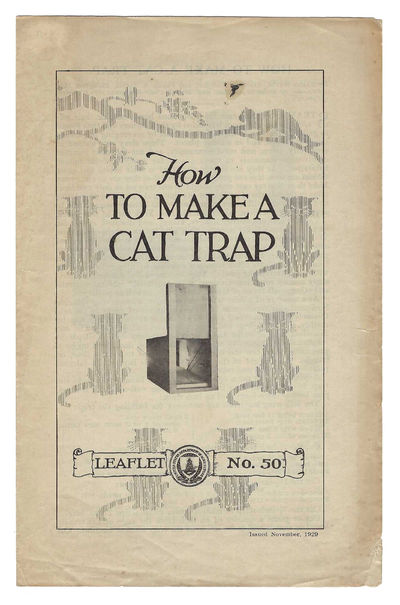 by Silver, James and Jarvis, Frank
Washington DC: U. S. Government Printing Office, 1929. First Edition. Very good. First edition, Leaflet No. 50; 9 1/4 x 6; pp. [1], 2-4; illustrated with two photographs and drawings; small chips with minor loss of paper to lower corners; a small spot to upper margin of title page; very mild foxing to fore-edge; in about very good- condition.Published by the Bureau of Biological Survey, the pamphlet described the menace that "vagrant" cats were and presented, with exhaustive directions, the scematics for building a trap to humanely catch the said cats. The problem came with the follow-up explanation for how to get rid of the cats, i. e. three alternate, but equally barbaric methods, involving carbon disulphide, calcium cyanide, and/or a body of water. The authors did warn the readers that the mentioned chemicals were "highly explosive and extremely toxic." In 1885 - 86, Congress established the Office of Economic Ornithology in the Department of Agriculture, to study the migratory patterns and feeding habits of birds and to conserve their population, to manage wildlife refugees, to oversee predators, etc. It would be renamed the Bureau of Biological Survey in 1905. Later still, in 1940, several bureaus would be combined to form the United States Fish and Wildlife Service. (Inventory #: 002875)
$85.00 add to cart Available from ZH Books
Share this item
ZH Books
Offered by

This Cotton is Perfumed with the New Odor Tri-Rose Bouquet...(Handkerchief Perfume Sample)

Chicago 1876
(click for more details about This Cotton is Perfumed with the New Odor Tri-Rose Bouquet...(Handkerchief Perfume Sample))