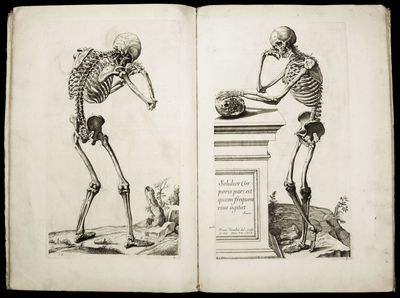 by TORTEBAT, François / [PILES, Roger de].
"THE MOST BEAUTIFUL REPRODUCTIONS OF VESALIUS' ILLUSTRATIONS EVER TO BE MADE" (CUSHING)

An attractive example of the rare first edition of one of the earliest and most influential anatomical treatises published expressly for the use of artists, with text by the famed theorist, art historian and connoisseur Roger de Piles (1635-1709) and fine, full-page plates engraved after Vesalius by François Tortebat (c. 1616-1690), a student of Simon Vouet (1590-1649) who had risen to become Peintre du Roy at the Académie Royale in Paris. "Tortebat's 12 copperplates designed for artists are by common consent the most beautiful reproductions of Vesalius' illustrations ever to be made" (Cushing, p. 144). Some bibliographers call this work the first artist's anatomy ever to have been published (e.g., Choulant), and it was decidedly on the vanguard of adapting modern medical knowledge derived from dissection for artistic purposes, even if it was slightly preceded as such by the Anatomie der wtterlicke deelen van het menschelick lichaem of Jacob van der Gracht (1660) and indeed by the Juan de Arfe y Villafañe in his De Varia Commensuracion para la Esculptura, y Architectura (1585; Book 2 treats anatomy).
The 3 plates by Tortebat representing skeletons are based on the Fabrica, while 4 of the 7 'musclemen' are from the Epitome and 3 from the Fabrica; the 2 figures of Adam and Eve are taken from the Epitome. "The plates are all freshly engraved and reversed with new lettering, and many have the landscape backwards of the Fabrica plates … All from the Fabrica are enlarged by 15 to 20 per cent. Those from the Epitome are of approximately original size" (Cushing, p. 144). Tortebat notes on one plate that he is the designer, engraver, and publisher of these images; all other plates are signed with his initials.
In his introductory remarks, Roger de Piles notes that anatomy books designed for the use of physicians were often too difficult for artists to digest and that they treated many topics of little use in drawing, painting and sculpture. He thus concentrates instead on the skeletal system and musculature, providing basic vocabulary keyed to Tortebat's plates. The remarks here on the study of anatomy and its relationship to the arts constitute the first published art theory of De Piles, who was soon to release his translation of Dufresnoy's De arte graphica and who by the end of the century would be "recognized as one of the most eminent figures in the world of art" (Skliar-Piguet, p. 806). He touches on the arts of Egypt, Greece & Rome, and the luminaries of 16th-century Italian painting, including Leonardo, Michelangelo, Raphael, Rosso Fiorentino, Salviati, and Titian, who at the time was still believed to have been the designer of Vesalius' plates. Tortebat's final plate, which depicts Adam, includes an engraved note attributing the illustrations to Titian and asking the reader to judge for himself, based on Titian's example before him, whether the discipline of artistic anatomy has merit.
The title page of the Abregé d'anatomie carries the letterpress date 1667, but the work's privilege and plates are dated 1668. In some copies, including the present example, an extra roman numeral 'I' has been drawn in on the title page to make the date read 1668. A few other emendations occurred in manuscript in the text; these are apparently authorial corrections, as they are seen in the same hand in other examples (e.g. Getty, BnF).
Roger de Piles' name does not appear on the title page of this work, but he notes in his 1708 Cours de peinture that he wrote the Abregé d'anatomie "under another name" or "under the name Tortebat" (pp. 153 & 158). This statement has been badly misinterpreted by some bibliographers (e.g., Choulant, Cushing, et al.), who (even to this day) state that "Tortebat" was the pseudonym of De Piles who was responsible for the whole project, when he was, in fact, effectively a ghostwriter of the text for Tortebat's project. De Piles name would be added to the title page for the 1733 Paris edition.
*Wellcome Library, 213049; Berlin Kat. 4667; Cushing, p. 144, VI.D.25; Choulant pp. 195-6 (no collation); A. Skliar-Piguet, "Piles, Roger de," Grove Dictionary of Art vol. XXIV, pp. 805-06.
OCLC locates US copies at Harvard, National Library of Medicine, Texas Medical, Yale Medical, Winterthur, and UCLA. We have also located copies at the Getty and NGA. (Inventory #: 5826)
$9,850.00 add to cart Available from Martayan Lan
Share this item
Martayan Lan, Inc.
Offered by