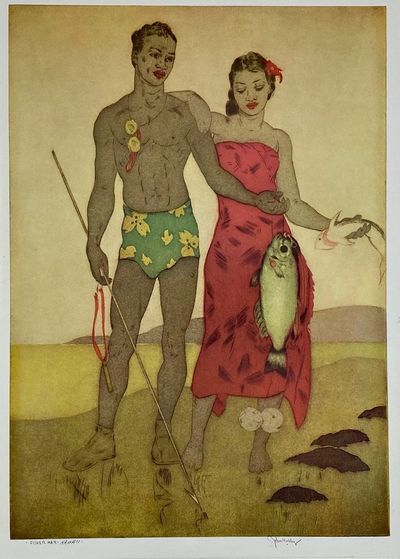 by Kelly, John [Royal Hawaiian]
Honolulu: Royal Hawaiian Hotel, 1954. Bifolium [35.5 cm x 51 cm] printed in full-color. Nice condition. Near fine. Dinner menu from the Royal Hawaiian Hotel in Honolulu for February 2, 1954, that features cover art by John Kelly. Built in 1927, the iconic Royal Hawaiian Resort, known as the "Pink Palace of the Pacific," ushered in a new era of luxurious resort travel to Hawaii. The construction cost $4 million and it was completed in 18 months. new six-story building featured 400-rooms and was designed in a Spanish-Moorish style popular during the period and influenced by screen star Rudolph Valentino and his Arabian movies. It opened its doors to guests in February 1927 with a black-tie gala celebration attended by over 1,200 guests.

Set on ten acres of prime Waikiki beachfront, the site of The Royal Hawaiian boasts a majestic lineage. the area was used as a playground for King Kamehameha after he conquered the island of Oahu. Queen Kaahumanu's Summer Palace was previously located on what is now the hotel's Coconut Grove garden. The resort was the brainchild of Ed Tenney, who headed the firm of Castle and Cooke and Matson Navigation, and Matson manager William Roth. the Royal Hawaiian was conceived as a luxurious resort for Matson passengers.

John Kelly (1879-1962) was an American painter and printmaker. He was born in Oakland, California in 1879. He studied art at the Mark Hopkins Institute of Art (San Francisco), and at the Partington Art School (San Francisco). Kelly worked for fourteen years as an illustrator for the San Francisco Examiner before he and his wife, the sculptor Kate Kelly, went to Hawaii in 1923. Their plan was to stay a year and work for an advertising agency creating material to promote tourism. They fell in love with the islands,and it's people, and stayed permanently. (Inventory #: 4867)
$75.00 add to cart Available from
Tschanz Rare Books
Share this item