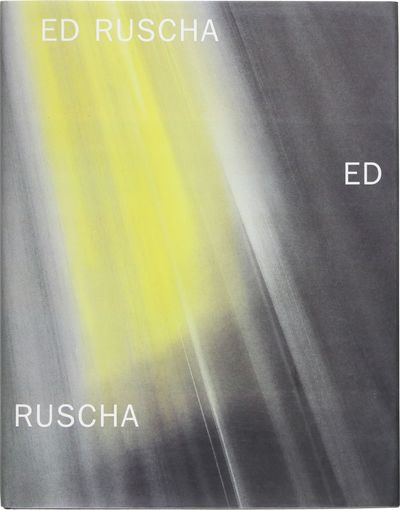 by RUSCHA, Edward. CLEARWATER, Bonnie (editor)
Lake Worth, FL: The Lannan Museum, 1988. Fine in a near fine jacket.. First Edition. Quarto. Limited to 4000 copies. SIGNED AND INSCRIBED by Ruscha to media titan and founder of CNN Ted Turner, thanking him for a trip on Turner's private jet, a Bombardier Challenger 605: "Ted, / Many thanks for the / enjoyable hitchike [sic] to Ft. Lauderdale aboard the Challenger / Best Wishes, / Ed Ruscha / Jan. '00." Published in conjunction with the 1988 exhibition of Ed Ruscha's murals from The Miami-Dade Public Library at The Lannan Foundation, Lake Worth, Florida. Features 67 color plates, with four fold-out panels. With essays by Bonnie Clearwater and Christopher Knight, documents from the Miami-Dade Public Library mural commission, including Ruscha's initial proposal for the project, and a selected list of the artist's exhibitions between 1982 and 1987. (Inventory #: 26985)
$750.00 add to cart or Buy Direct from Harper's Books
Share this item
Harper's Books
Offered by