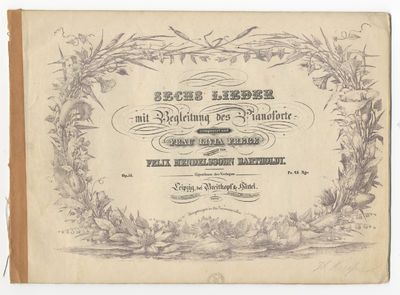 "One of the most gifted and versatile prodigies, Mendelssohn stood at the forefront of German music during the 1830s and 40s, as conductor, pianist, organist and, above all, composer. His musical style, fully developed before he was 20, drew upon a variety of influences, including the complex chromatic counterpoint of Bach, the formal clarity and gracefulness of Mozart and the dramatic power of Beethoven and Weber.

Mendelssohn's emergence into the first rank of 19th-century German composers coincided with efforts by music historiographers to develop the concept of a Classic-Romantic dialectic in 18th and 19th-century music. To a large degree, his music reflects a fundamental tension between Classicism and Romanticism in the generation of German composers after Beethoven." R. Larry Todd in Grove Music Online. (Inventory #: 36196)
$303.00 add to cart or Buy Direct from
J. & J. Lubrano Music Antiquarians
Share this item