The North Pole; Its Discovery under the Auspices of the Peary Arctic Club [Includes laid in original photograph of Peary not published in this edition] 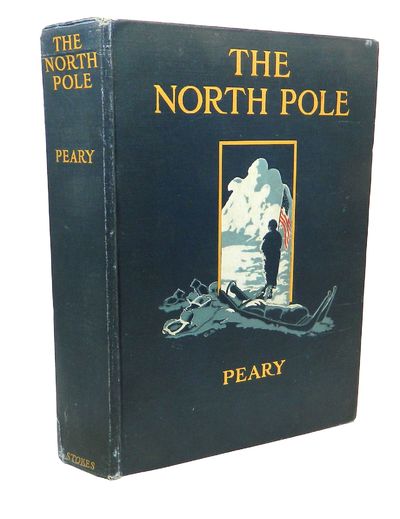 by Peary, Robert E.
New York: Frederick A. Stokes Company, 1910. First Edition, 1st Printing. Near Fine. [September 1910] [9.75x7in]; xxxii, 373 pp., frontispiece, eight hand colored and 100 black and white photographs on 72 plates, colored fold out map at rear, tipped in publisher advertisements for this book and others; Dark blue cloth covers with gilt lettering on front and spine, partially embossed illustration of dog sledge and explorer with American flag in ice field on front, top edge gilt with cut edges; minor shelf wear to bottom edges and spine top and bottom, minor rubbing to rear cover, prior owner ink inscription on front free end paper, chips to folding map edge and small closed tears in map folds and attachment to end paper [map includes Bradley Is (Cook) just north of Crocker Land (Peary), which is a 1st state and 1st printing point] Overall condition is Near Fine. [Arctic Bibliography 13230, Howgego III P10]. Also includes an original 1909 Frederick Stokes promotional sepia photograph [9x6in] with blue ink stamp "Copyright, 1910, by Frederick A. Stokes Company" on lower right corner. On verso the same stamp and prior owner pencil notes. The image was taken in a studio, as was many of the promotional images of Peary. This image was not included in Peary's North Pole editions. It appears that a cropped version was in Matthew Henson's "A Negro Explorer at the North Pole", Frederick A. Stokes Company, 1912. The original photograph is in near fine condition with minor chips on the bottom edge and a small closed tear on the right edge and several faint crease marks. [copies found in National Portrait Gallery and Getty Images]. Robert Peary [1856-1920] was an active arctic explorer from 1886 in visits and six organized expeditions. This is a narrative of his last expedition of 1908-09. His ship, the Roosevelt, traveled through the Smith Sound - Robeson Channel to Cape Sheridan on North Ellesmere Is. to set up winter quarters with 23 men. He, Matthew Henson and four intuit guides claimed to have attained the pole on April 6, 1909. However, there has been great controversy over the years, since none of the men with him at the pole could verify the position and there were questions raised after returning when others tried to validate the data. Matthew Henson was an African-American explorer that was with Peary for over 23 years and accompanied him on many expeditions. At the time, Henson did not receive recognition for his accomplishments and only later wrote a memoir of his arctic experiences in "A Negro Explorer at the North Pole (Inventory #: 13836)
$690.00 add to cart Available from
David Spilman Fine Books
Share this item