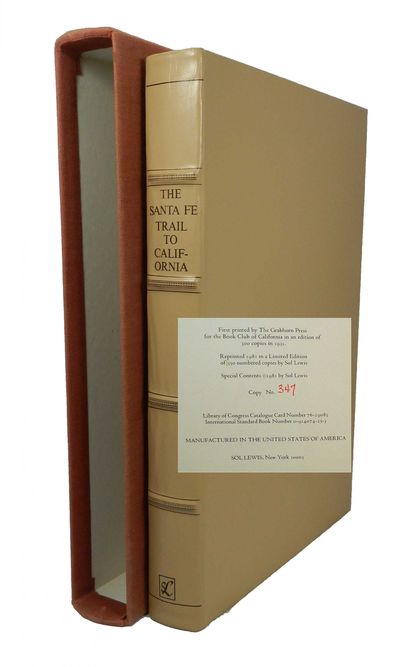 by [Powell] Watson, Douglas S. [Ed.]
New York: Sol Lewis, 1981. First Edition. Slipcased. Near Fine. Limited to 350 numbered copies, #347, Reprint of 1931 Grabhorn edition (158), [14x10in]; [10], 272 pp., frontispiece fold out illustration of Pueblo de Los Angeles, 15 illustrations with three fold out, two fold out and color maps, several vignettes in text and margins; Tan full leather with brown lettering on spine with rib designs, all edges trimmed, red and black ink title page, light blue silk moire end papers, dark brown ribbon marker; Light brown-rust buckram cloth slipcase; Near fine covers and text with negligible wear, a very good slipcase with little fading along edges and minor fraying at top and bottom seams. [Kurutz 515, Hill 1379 and 1434 (1931 edition)]. H. M. T. Powell wrote one of "... the most important and highly celebrated overland narratives." on the California Gold Rush. He left Greenville, Illinois in April 1849 with a small group of others seeking fortune in California. Eight months later, after traveling the Southern route from Independence to Santa Fe, they arrived in San Diego. Powell was tired, broke, covered in "... sand, mire, dust and desert!". He spent several weeks recuperating before traveling overland to San Francisco and arriving in May 1849. Over the next, he worked several different jobs and tried mining in the quick silver mines of Santa Clara and the southern gold mines for Frémont. By the end of April, 1851, he abandoned the mines and set out for odd jobs to earn passage back homein Febraury 1852. (from Kurutz).Powell was an accomplished artist and learned writer, and he worked as both to earn money. The Journal was written in the 1860's and included many of the vignettes printed in this edition. His pencil drawings of the Missions and Pueblos of California, also included in this edition, are detailed. The 1931 Grabhorn edition, for the Book Club of California, was the first publishing of Powell's Journal's and drawings and is an important work to for a Western Americana collection. This 1981 edition is a fine press reprint with all of the qualities of the Grabhorn edition. The new forward by Howard R. Lamar adds information on Powell and the times. (Inventory #: 13820)
$403.00 add to cart Available from
David Spilman Fine Books
Share this item