A Pictorial View of California;; Including a Description of the Panama and Nicaragua Routes with information and advice interesting to all, particularly those who intend to visit the Golden Region By a Returned Californian 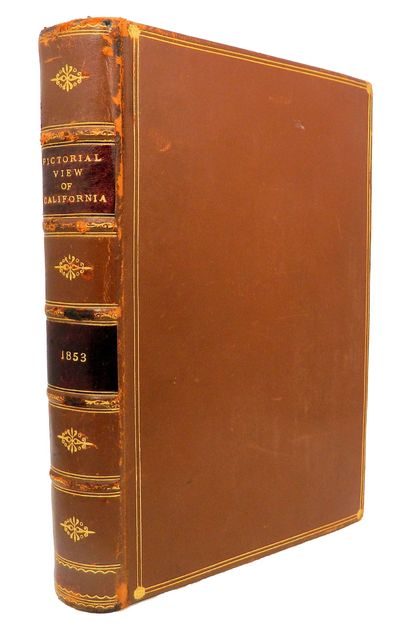 by [Letts, John M.]
New York: Henry Bill, 1853. Second Edition. Full leather. Very Good. George V. Cooper. [9x6in]; vii, [1], [9]-224 pp., 47 of 48 lithographed plates with hand-colored illustrations by George V. Cooper, including frontispiece of San Francisco; Rebound in full leather with gilt borders and designs, gilt lettering, rules and designs on morocco spine labels, blue-gray end papers, all edges trimmed; Minor shelf wear to covers, edges and corners with rubbing along joints, edges, corners and spine ribs, age toning to text and plates with minor foxing spots thoughout, damp stain along top and bottom forecorners, blind stamp of Buffalo Free Library on title page, prior owner name in pencil on verso of frontispiece and rear end paper, plates lacking tissue guard, plate facing p.114 misbound from listed p. 160, lacking Grand Cathedral, Panama plate. Overall a very good copy of an important early Gold Rush narrative. [Kurutz 398e, Cowan 64 p. 390, Wheat Gold Rush Books 125, Hill 1016]. John M. Letts (1818- ?) was one of the first to sail from New York to California in January 1849. By way of Chagres and Panama City, he arrived five months later in San Francisco. He then went directly to Sacramento and the placer mines to in the Sierra Nevada mountains. His purpose appears to have been to gain experience in the travel and conditions. Letts stated "A season's residence in the mineral regions enabled me to obtain a correct interior view of life in California." He returned to New York by way of Central America in November 1849. His accounts of the is one of the better details of "... gambling, violence, and life in the mines" from Kurutz narrative. George Cooper, a New York artist, traveled with Letts to illustrate the adventure. This book is also known for the colored lithographs of Central America, California and mining life. The sketches are not as fine as others were later and not well received in California. However, they are an important look at the early travels and mining in 1849. (Inventory #: 13813)
$684.00 add to cart Available from
David Spilman Fine Books
Share this item