Phoenixiana;; Or Sketched and Burlesques 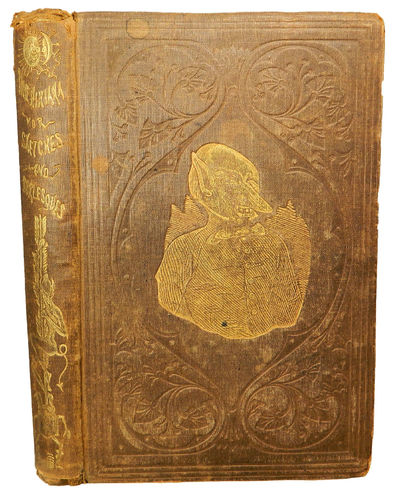 by Phoenix, John [George H. Derby]
New York: D. Appleton and Company, 1856. First Edition. Very Good. [7.75x5.5in]; 274 pp., [14] advertisements, frontispiece illustration of John P. Squibob; Publisher original Brown cloth covers with blind stamped borders, designs and gilted illustration of Squibob, gilt lettering and designs on spine, all edges trimmed, light blue end papers; Some self wear to covers, edges and corners with rubbing and several spots on covers, gilt tarnished, corners bumped and fraying on bottom, top and bottom of spine frayed, two worn spots near top of rear joint, minor fox spots and age toned text. [Wheat Books 63]. George Horatio Derby (1823-1861) also known as John Phoenix or John P. Squibob or just Squibob, was an 1846 West Point graduate. As a Lt. in the U.S. Army Corps of Topographical Engineers, he , participated in the Mexican-American war and was assigned to California in 1849. Under General Riley, Military Governor, he explored and mapped of California and Oregon during the early years of the Gold Rush. To supplement his army income, he wrote humorous articles and this book on the irreverent side of California life. This book contains Derby's pieces as "Professor John Phoenixiana" and "Squibob," poking fun at such topics as military surveyors and explorers; contemporary travel accounts of the Mission Dolores, Benecia, Sonoma, San Francisco, and San Diego; literary societies and women's clubs; astronomy; and Army life. Derby is described in Wheat Books, "The lighter side of the Gold Rush, by "father of the native American school of Humor," who was also an eminent topographical engineer. Derby also wrote "The Squibob Papers" and prepared several notable early maps of California areas. (Inventory #: 13819)
$184.00 add to cart Available from
David Spilman Fine Books
Share this item