A Stroll Through the Diggings of California 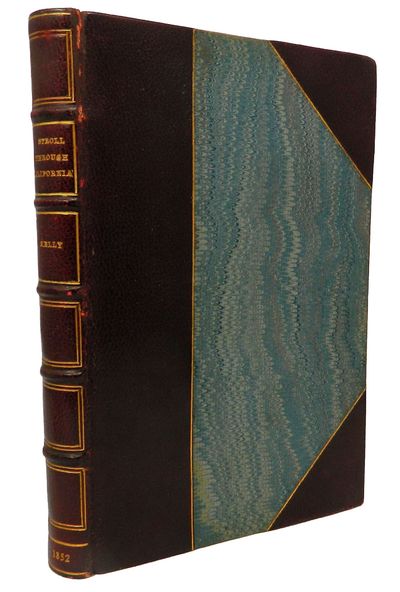 by Kelly, William
London: Simms and M'Intyre, 1852. First Edition. Near Fine. 8vo [7x4.75in]; xii, [13] 14-240 pp.; Later three-quarter morocco with blue marbled covers with gilt edge rules, gilt lettering, rule tooled, and raised bands on spine, top edge gilt other trimmed; Minimal shelf wear to covers, edges and corners with a little rubbing along the joints, bookplate of Edwin Stanton Fickes on front end paper, binders stamp Weeks & Co., London on rear end paper, binding offsets to end papers. [Kurutz 371a, Wheat Books 115 (note), Wagner-Camp 200:3]. William Kelly (1791-1855) was one of the many Englishmen that traveled California during the Gold Rush, did a little digging and, upon return to England, wrote a travel book on his adventures. Kelly wrote two books on his travels, the first was "Across the Rocky Mountains from New York to California" and, this book, "A Stroll Though the Diggings of California", both published and sold separately in 1852. Some had both bound as a single book and this on one was bound separately.

This book has much detail and entertainment on the life in the mines. From Kurutz, he traveled to "... the major districts of the Northern Mines, including the Trinity Mountains and quicksilver mines near San Jose. Kelly also observed the Indians; remnants of the Spanish and Mexican Pueblos , ranchos and missions; and the bustling and frenetic life of San Francisco." An important addition to any Western Americana and Gold Rush collector.

Edwin Stanton Fickes (1873-1943) was a civil engineer and senior vice president of Aluminum Company of America (ALCOA). He was refereed to as an aluminum pioneer. He was also a collector of western and Canadian history with an extensive 10,000 collection of books and maps. Upon his death, his collection was purchased by bookseller Peter Decker. Also, in 1943, his mansion in Pittsburgh was donated to the Pennsylvania college for Women and named Fickes Hall. (Inventory #: 13843)
$633.00 add to cart Available from
David Spilman Fine Books
Share this item