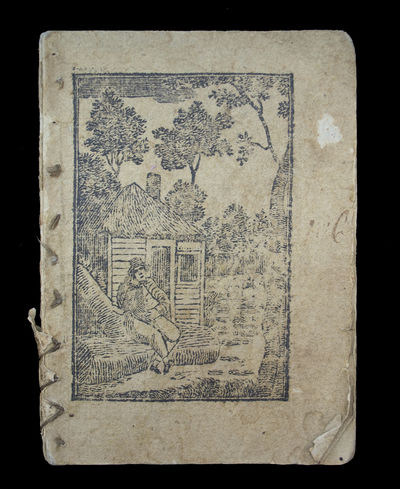 by CHAPBOOK
Rare Complete Early American Chapbook [CHAPBOOK]. The History of Tommy Titmouse. A little boy, who became a great man by minding his learning, doing as he was bid, and being good-natured and obliging to every body. Together with The adventures of the old man of the woods, and other stories equally pleasing and instructive. Embellished with Cuts. Exeter [N.H.]: Printed and sold by H. Ranlet, 1801. Rare second American Edition of this chapbook. We could only find one copy of this edition at the American Antiquarian society [which lacks back cover which is part of pagination] and none at auction in the forty years. The first American edition was printed in Boston in 1798. There is only one known copy of that edition, which is at the Morgan library and it is incomplete, missing ìDivine Hymnsî [pg 53-58]. Our copy is complete with illustrated wrappers which that are included in the pagination, ìDivine Hymnsî[pg 53-58], and ìRiddlesî by Peter Puzzlewell [pg 59-62]. One sixteen volume (4 x 3 inches; 102 x 75 mm). 61, [3] pages. With illustrated wrappers, frontispiece and numerous woodcut illustrations in the text. The first edition of this chapbook was printed for in London for Elizabeth for Newbery in [1786?]. We could only find two copies of that first British edition at libraries and none at auction. Original buff illustrated wrappers. Wrappers with some rubbing and fraying along edges. Some minor toning throughout. Occasional light pencil and ink notes, not affecting text. Overall very good. ìThis little Book, published by desire of Mr. Tommy Titmouse, and his uncle Mr. Worthy, is recommended to all little boys who would become great Men, for whose good it is printed; and it is hoped that none who love learning and good behavior will read it without being diverted by the pleasing stories it contains, and benefited by its lessons of instruction.î (From the Advertisement). ìChapbooks can be loosely defined as the small, unbound, paper-covered books that were carried and sold by itinerant peddlers known as "chapmen". They were in circulation from the sixteenth century until the early nineteenth centuryî (McGill Library's Chapbook Collection). Current edition: Welch, d'A.A. AMERICAN CHILDREN'S BOOKS 1173.2. Not in Shaw & Shoemaker. First American Evans Bristol B10351 Shipton & Mooney 48471 HBS 68448. $2,250 (Inventory #: 68448)
$2,250.00 add to cart Available from
Heritage Book Shop
Share this item