THE RELEVANCE OF INTERNATIONAL ADJUDICATION 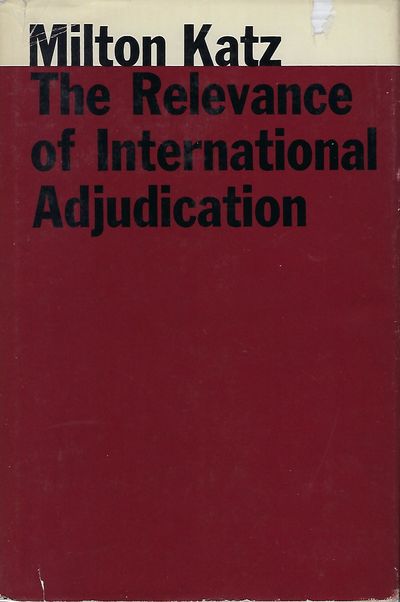 by KATZ, Milton
Cambridge: Harvard University Press, 1968. First Edition. Signed by Katz on the front endpaper. Also, with an autographed note from Harvard University law professor John Ely to Katz laid-in. Milton Katz [1907-1995] was one of the academics who left America's great universities to serve first Roosevelt's New Deal, then the war effort, and finally the reconstruction of post-war Europe. Katz began as a lecturer at the Harvard Law School in 1939 and returned there after his government service. After Pearl Harbor, he returned to Washington, DC to work for the War Production Board, worked and then the Combined Production and Resources Board and, in 1948, was involved in the Marshall Plan. After retiring from Harvard at 70, Katz taught at a local law school in Boston, Suffolk University John Hart Ely [1938-2003] was an American legal scholar known for his studies of constitutional law. He was a professor of law at Yale University from 1968 to 1973, at Harvard University from 1973 to 1982, then at Stanford University from 1982 to 1996, where he served as dean of the Stanford Law School from 1982 to 1987. Ely was one of the most widely cited legal scholars in United States history. This is an uncommon first edition book and Katz's autograph is uncommon. 8vo., gray cloth in dust jacket; 165 pages. Based on a series of six lectures given by Katz in 1967.. Very Good (covers nice; contents clean & tight); minor wear (small chip top of front cover) d/j. (Inventory #: 57366)
$125.00 add to cart or Buy Direct from Antic Hay Books
Share this item
Antic Hay Books
Offered by