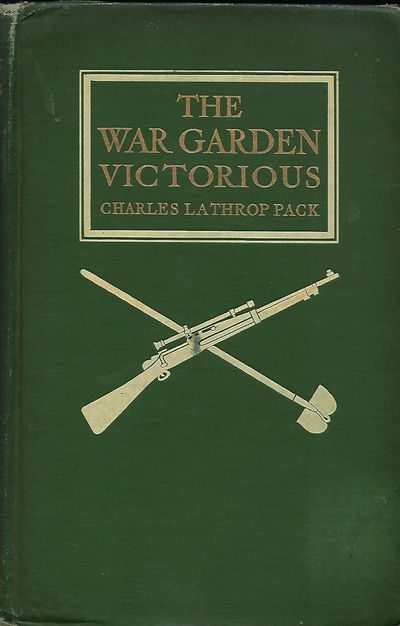 by PACK, Charles Lathrop
Philadelphia: J.B. Lippincott Company, 1919. First Edition. Signed by Pack on a presentation bookplate on the front pastedown. He donated this book to the Metropolitan Club in New York City and the club's blindstamp is at the top of the title page. Charles Lathrop Pack [1857-1937], a third-generation timberman, was one of the five wealthiest men in America prior to World War I. During the war, he was a principal organizer and was heavily involved in the war garden movement in the United State. In March 1917, Pack organized the US National War Garden Commission and launched the war garden campaign. After the war, he documented the victory garden movement in this book, "The War Garden Victorious." An idea during the first World War to encourage the nation to grow gardens at home or anywhere. Information on gardening and home storage of vegetables, including home canning and drying of vegetables & fruits. These books were obviously heavily-used and few copies have survived. 8vo., decorative green cloth, stamped in white & gilt, top edge gilt. With the original color frontispiece by James Montgomery Flagg. With other photographs & illustrations.. Very Good (moderate wear, spine dull but front cover nice & unrubbed; contents clean & tight with neat repair to rear hinge). (Inventory #: 57368)
$150.00 add to cart or Buy Direct from Antic Hay Books
Share this item
Antic Hay Books
Offered by