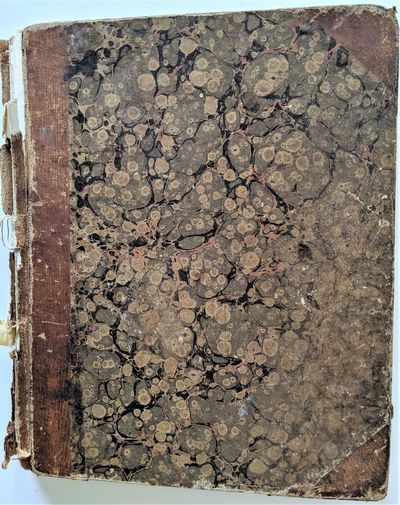 by Shoe Industry. Allen Freeman
Boston, 1846. 8vo.   230 x 185 mm.  [7 ¼ x 9 inches].  114 pp. Contemporary boards, leather tips. Spine broken with some signatures sprung.  Written in a legible hand in ink.  One of the more detailed account books that documents not only the personal business transactions of a Boston Brahmin, but also his payments to dozens of local churches, societies, poor houses, and libraries, including his membership dues in the Boston Athenaeum.  Freeman Allen was born in 1800 and according to the Abner Forbes in his Book Rich Men of Massachusetts, was worth over $ 300,000 in 1852.  "He began poor. Became of shoe dealer, one of the largest in Boston." The business accounts cover personal investments, loans, income and expenditures of the partnership of Allen, Harris & Potter, Company Boot, Shoe and Leather dealers.  The company was listed in the Boot and Shoe Recorder as "... one of (Boston's) largest and most successful houses in the shoe trade," Allen, Harris & Potter was organized in 1846 and continued until 1853  when Allen's stack was purchased by John Cheney Potter and a new partnership. The account book records the initial investments in Allen, Harris and Potter and the terms of the partnership. Among the many transactions listed are a  "Store 55-57 Pearl St bought of Dowley for $5500 pd for in cash", "Nov 12, 1852 1 share Boston Athenaeum  cost $151", stock in third municipality New Orleans, many bank and railroad shares, and a lot at Mt Auburn. In 1850 he bought two tickets to a Jenny Lind concert. Allen's business brought him wealth and he contributed to the Newton Whig Campaign and bought a piano forte from Chickering. The household kept servants and for his daughter Harriet Elizabeth Allen, he paid tuition at Emerson School, and for French Lessons and Riding School. For son Henry Freeman Allen, he purchased skates, a sleigh ride, paid for "Mr. Sullivan School", eye glass, congress boots,  and Chess men and board. In 1857 he was paying tuition for his son at Harvard. Freeman Allen married Harriet Reed, moved to Newton, and had children Henry Freeman Allen and Harriet Elizabeth Allen. His son, Henry Freeman Allen (1838-1914), became an Episcopal priest and married Georgiana May Stowe (1843-1890) the youngest daughter of Harriet Beecher Stowe and Calvin E. Stowe, in 1865.  He had estates in Newton and in Boston at 29 Pemberton Square. Another address was 37 1/2 Beacon Street. A humorous anecdote appeared about the firm summing up the partnership Allen, Harris & Potter in the Shoe and Leather Reporter, 1890.  "Of the firm for instance Allen, Harris & Potter, Mr. Potter was the principal sales man when I knew him.  . . . Mr. Harris took care of the counting room; I never saw him out of it except in the street on his way to and from dinner.  Mr. Allen did what he had a mind to." Forbes, Abner.  Rich Men of Massachusetts, Boston, 1852, pp. 10, 148.  Boot and Shoe Recorder, 1890. Volume 33, pp. 75.  Shoe and Leather Reporter, 1890.  p. 1021. (Inventory #: 769)
$375.19 add to cart Available from
De Simone Company
Share this item
De Simone Company, Booksellers
Offered by